There are lots of comments worth reading on the LessWrong post.

When a traveler introduced smallpox to New York City in 1947, the city—and in particular its health commissioner, Israel Weinstein—apparently ran an epic vaccination campaign, reaching 5 million people in the first two weeks.[1] That is, four hundred thousand vaccinations per day. San Francisco in two days.

For COVID, the first New York City vaccine was given on the 14th of December, and if I understand, by the 10th of January, twenty seven days later, 203,181 doses had reportedly been given. That’s around eight thousand doses per day. A factor of fifty fewer.

Part of the answer is presumably ‘regression to the mean’: if thousands of different cities at different times try to roll out vaccinations quickly, with a similar basic ability to do so, and there is some random chance in how well it goes, then the one we tell stories about seventy years later will one that got surprisingly lucky. You shouldn’t expect your own effort to go as well as that best one. But—without having done the statistics—I don’t think you should expect your attempt to be fifty times worse. New York didn’t get that lucky.

Perhaps there are other differences in the problems faced. For instance, the current vaccine needs refrigeration, or we are so late in the disease spread that we can’t all crowd together in around fast-moving vaccinators, or be rounded up in our natural crowded habitats, like classrooms or offices.

Though the 1947 situation looks harder in important ways too. For one thing, there was no time to prepare. The vaccination project began the day that the disease was identified to health commissioner Weinstein. By 2pm, he was apparently holding a news conference publicly asking residents to be vaccinated. With COVID, there were about ten months to prepare. For another thing, now people have smartphones with which they can be alerted, and computers and online systems that might be used to coordinate them and tell them what to do.

I heard about this episode from the Rachel Maddow Show, and read about it in the New York Times, both of which bring it up to note the inadequacy in the current vaccine efforts. The New York Times says a rollout like this, “almost certainly couldn’t happen today”, and offers some explanations:

“In 1947, the city was able to act alone, as opposed to navigating a complicated relationship with the governor of New York and the federal government,” said Dr. Irwin Redlener, director of the Pandemic Resource and Response Initiative at Columbia University’s Earth Institute. “The city was able to say, ‘We’re going after this,’ and then make it happen.”

But this time, with the coronavirus pandemic, New York faces a logistical hurdle. Experts in infectious disease point to a hollowing out of the public health infrastructure — not just in the city, but across the country.

“This was the height of polio in the United States,” he said. “People had a much better sense of the impact of infectious disease. They saw it all the time, and they were rightly fearful. But they were also optimistic that medical science could conquer this. In 1947, there was tremendous faith in the medical community, unlike today.”…

…Yet, [infectious disease experts] believe the biggest obstacle is not distribution but the public’s distrust of government, science and the media.

“We’re coming out of a train wreck of messaging,” Dr. Redlener said. “We’ve learned that politics is poison to a public health initiative, especially during a crisis. Honesty and straightforward, clear messaging are absolutely critical.”

In 1947, Dr. Weinstein was the only voice with a megaphone. He spoke and people listened.

“Back then, there was a much simpler media landscape,” Ms. Sherman said as she laid out the Ad Council’s campaign, which is due to kick off early next year. “In today’s environment, we’re dealing with a highly, highly fragmented media. We’ll be relying on micro-influencers who are the trusted voices.”

They seem to favor #3, noting that it is what ‘experts believe’. But it seems so implausible—am I totally misunderstanding the claim? On the current margin, if lack of public trust was making the vaccine rollout even ten times slower, wouldn’t we see campaigns begging us to go out and get the incredibly accessible vaccine, rather than seeing elderly people camping in outside queues to get vaccinated, and most people being told that they just can’t have a vaccine for months or a year? Perhaps they mean that ultimately the number of doses given out will be limited by public willingness to receive them? (Which seems surely true, but not necessarily the answer to an interesting question).

The NYT’s other suggestions don’t seem immediately wrong, but are too vague for me to understand. I guess I’d like to know how things went differently at an object level. At what point, in 1947, did someone decide that it was their job to gather a volunteer army to administer vaccines, for instance? Do people work in similar roles nowadays? Did they think of this? Did they expect to get into trouble for having a bunch of lay people giving injections? Do they have to fill out a lot of paperwork to recruit them, whereas in 1947 they would have just shouted for them in the street? (I don’t know.) If New York had had these constraints, would their vaccination campaign have looked like ours, or is there more to explain?

I suppose I have several questions:

This isn’t just an idle inquiry, and shouldn’t be just another interesting story for another payload of political disapproval.

Naively extrapolating, New York City could be fully vaccinated in about seven weeks if we knew how to do what was done in 1947. At the current rate, which will presumably change, vaccinating everyone would take years.[2]

What if someone figured out how to replicate even part of what New York did before at Weinstein’s direction? In America alone, around three thousand people are dying each day now, as they wait for the vaccine. My boyfriend’s ninety year old grandmother in Vermont was diagnosed with covid last week. Her center was scheduled to begin vaccinating its residents this Wednesday.

(Regardless of what makes things slower these days, good on everyone who is working to forward the vaccination effort, and also those doing their best to make it appropriately safe. Good luck being fast and right.)

P.S. In fact the whole of America vaccinated fewer people in the first two weeks of having a covid vaccine than New York did in 1947: 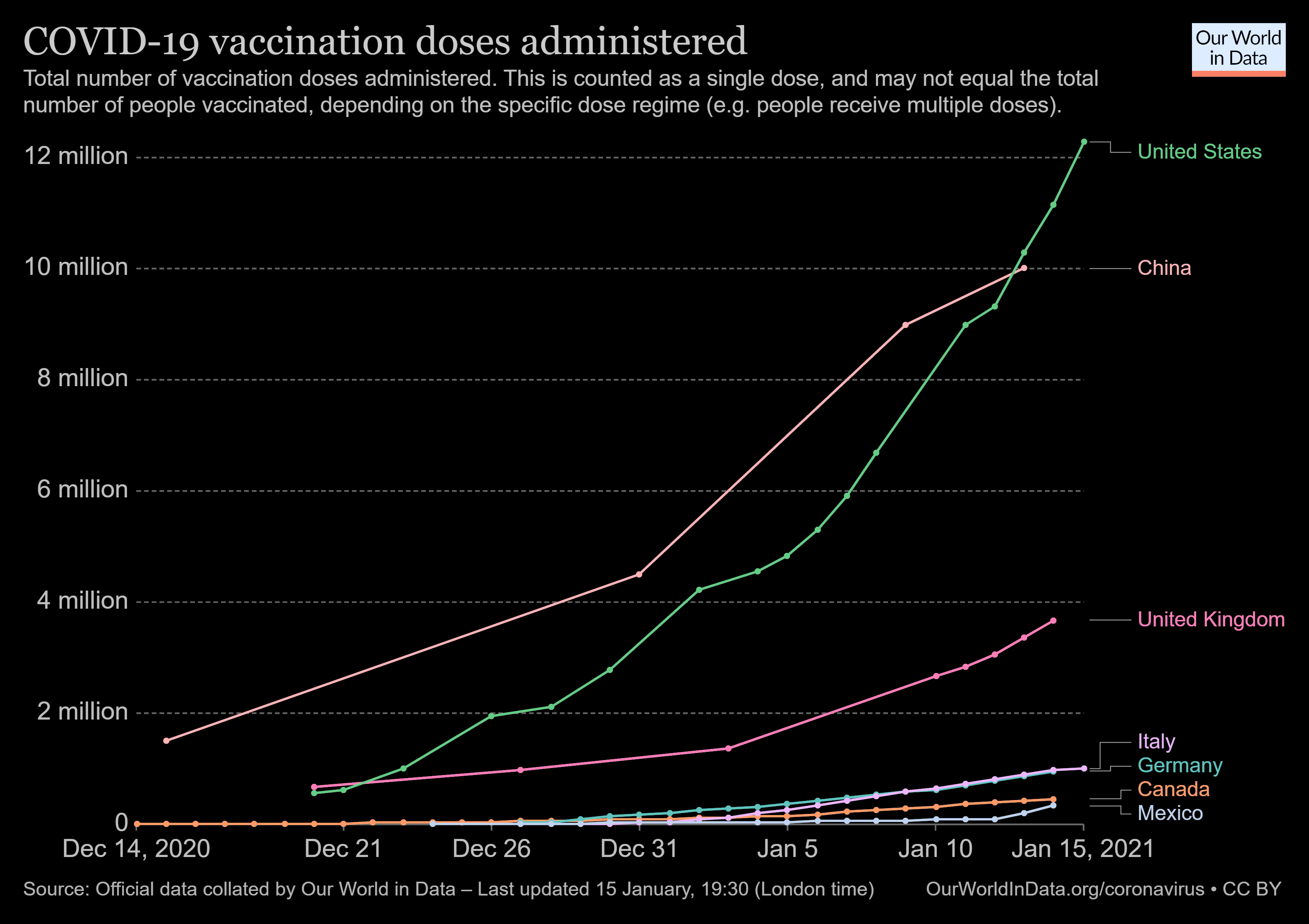 Also interestingly, others are not doing better.