effektiv-spenden.org (ES) (which roughly translates to effective giving in German) is a dedicated donation regranting platform for Germany that was founded in close coordination with the Effective Altruism Foundation (EAF) in early 2019. The main goal of ES is to expand the appeal of donations to effective charities beyond the EA community to the general public by offering a curated set of effective charities for a selected subset of broadly appealing cause areas, namely, global health and development, climate change, and animal welfare.

In 2019, ES has generated a donation volume of 358,869.75 Euro with a strong growth trajectory for 2020 (i.e., ES already regranted 157.427,45 Euro in Q1 2020). Survey data of donors suggest that a good proportion of the donation volume came from beyond the established EA community in Germany and, thus, probably generated substantial counterfactual donations to effective charities. We attribute this success at least in some extent to the opportunistic use of media outreach opportunities.

In 2020, ES is planning to grow the donation volume significantly through two strategies. First, ES will continue to push effective giving to the public at large by opportunistically using media engagements. Second, ES is planning to extend its operations to Switzerland and also take over the legacy regranting operations of the EAF focused at the EA community in Germany and Switzerland. This second development is a response to EAF’s pivot away from EA community building related activities toward a focus on the research of longterm suffering risks.

ES is a donation regranting platform in Germany that started in April 2019. ES was co-founded and is run by Sebastian Schwiecker in close coordination with EAF. Looking back, the reason for the foundation of ES was a combination of the strategic considerations of the EAF to deprioritize efforts directed at EA community building in Germany as well as a general goal to expand the appeal of donations to effective charities beyond the EA community to the general public. In particular, ES was founded on the working hypothesis that a much broader fraction of the population might be interested in donating effectively compared to becoming full fledged and dedicated EAs. Thus, ES has developed a brand identity that is complementary but separate to that of the EA community in Germany. For instance, ES has so far limited itself to charity recommendations for a selected subset of broadly appealing cause areas, ES uses images prominently to appeal to the emotional dimensions of donations, and the term EA is only mentioned on the FAQ page rather than the homepage. Also ES has been very open to engage with mainstream media outlets (e.g., a German public TV station, radio stations, and newspapers) to push the basic idea that it is often possible to donate more effectively.

The selection of charities supported by ES is based on the recommendations from charity evaluators such as GiveWell, Animal Charity Evaluators, Founders Pledge, and Let’s Fund. Currently, ES is raising donations for 9 effective charities from 3 cause areas:

Our Year in Numbers

Altogether, ES raised 358,869.75 Euro for regranting to effective charities in 2019. The following table lists the distribution of donations per charity and cause area.

Looking at the temporal distribution of donations, we see a strong growth trajectory for total donations from the start in April to December which extends into 2020. In addition to seasonal effects, the explosive growth in donations in December might be explained with the addition of Climate Change and Animal Welfare as new cause areas. As one can see despite only being available for about a month, Climate Change has already started to compete for the top spot in terms of donation volume. 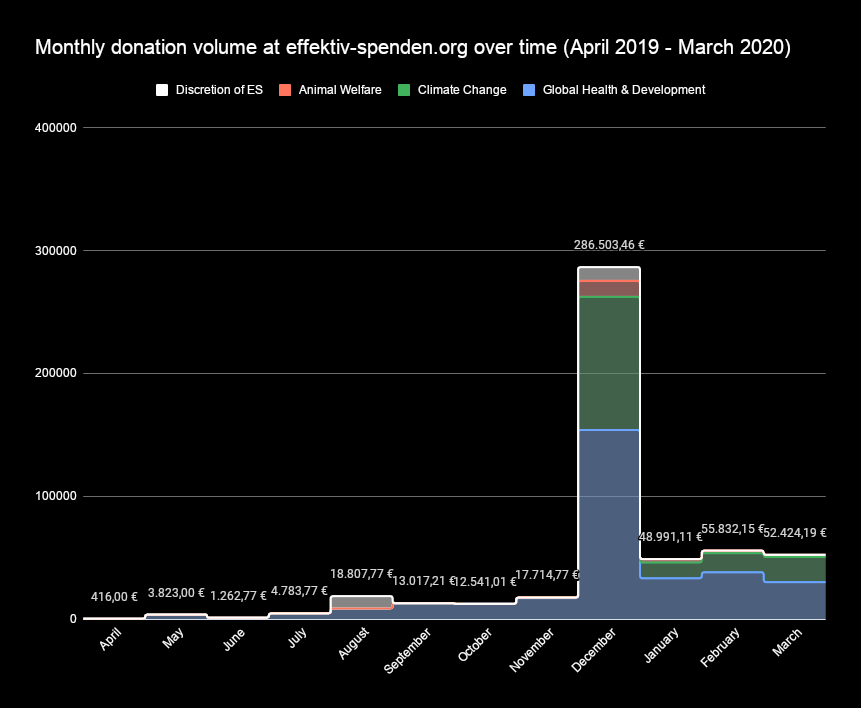 We are especially happy to see that the giving season seems to have boosted the overall donation volume directed at ES with a monthly donation volume of around 50k Euro carrying over into Q1 2020. In March 2020 ES had 359 monthly recurring donations with a total donation volume of 20.529,21 Euro. Conservative extrapolation based on these numbers yields an estimated growth of donation volume by more than 2x over the course of 2020.

The cost for running ES in 2019 have been less than 60k Euro which includes 1 FTE and expenses for marketing, hosting, and transaction costs.

What We Have Learned So Far

In addition to collecting general data about operations, ES has also been running a donor survey as part of the donation process. After a donation is made, a simple form asks the donor for additional information regarding their donation such as how knowledgeable they are about EA and how they got to know about ES. Given an analysis of 326 responses (45% of all donors in 2019) we can observe that the overall EA knowledge of donors was rather low (49% of respondents rated their EA knowledge as 1 or 2 on a scale from 1 “never heard about it” to 5 “expert”) and outreach activities were mentioned by 46% of respondents as referrals.

We see this data as support for the working hypothesis of ES that the general public outside of strongly engaged EAs is broadly interested in effective giving and can be motivated and reached through tailored offerings and broad outreach activities. Moreover, based on this data we also tend to conclude that a significant amount of the donation volume was counterfactually directed to effective charities based on the outreach activities of ES. Altogether an preliminary cost-effectiveness analysis suggests that ES has had a positive counterfactual net impact in its first year of operation with a funding multiplier of 1.2 to 2.6 (best guess 1.8) and much room for scaling growth at a comparable level of operational overhead in 2020.

ES plans to significantly expand the reach of its operation through a takeover of the legacy donations regranting activities of the EAF in Germany and Switzerland. This takeover is expected to take place in Q4 2020 and shift an annual donation volume of over 1,000,000 Euro to ES. It is important to note that these donations would only marginally increase the counterfactual donations raised by ES because they are already occurring. However, this move will help the EAF complete its organizational pivot and free up significant resources that can then be directed at other activities.

In addition to the expansion in terms of regranting operations, ES is currently engaged in a project to update and redesign effektiveraltruismus.de, which is the most prominent EA website for German speaking individuals. The main goals of this project are to increase the accessibility of knowledge about the EA community and improve the overall user experience for people interested in EA in Germany. A detailed measurement of the effectiveness of this project is planned.

Beyond these exciting new developments, ES is planning to stay true to its original focus on targeting the general public rather than only the existing EA community and currently working on a complete redesign and relaunch of its brand identity and website for the giving season in 2020. Deliberate and opportunistic engagement with mainstream media outlets is planned to remain a core ingredient of ES outreach strategy going forward. Additionally, ES will try to further broaden its reach through a stronger emphasis on content marketing, advertising via Google grants, social media formats, newsletters, public lectures, and individual donation advisory. Portfolio-wise an expansion to all charities recommended by GiveWell and ACE is planned.

ES operations are currently funded until the end of 2020. Beyond that point ES is looking for active support through donations. We currently plan with a yearly budget of around 120k-150k Euro in 2021 to support a workforce of 1.5 FTE and cover expenses such as operations, marketing and hosting. We conservatively expect at least a stable funding multiplier of at least 2x with considerable room for additional growth.

Below we’ve outlined a handful of considerations examining how sensible it is to support ES, followed by our brief reply to these points. Feel free to pass additional considerations to info@effektiv-spenden.org.

We acknowledge and follow the ongoing discussions about the role of outreach activities within the EA community. There are good arguments for an increased focus on outreach as well as against it. ES is somewhat agnostic regarding this issue and views the role of its operations from an orthogonal perspective. The working hypothesis of ES is that effective giving has potentially a much broader target audience than EA itself. As a consequence, we do not emphasize the EA brand in our activities and communications but rather focus on building a separate brand identity for effective giving. We argue that this reduces the risk exposure of the EA community significantly because effective giving is a much less sophisticated and nuanced concept compared to EA at large. Nevertheless, we hope to share potential upsides with the EA community by providing clear links to EA organizations and thinking were appropriate.