Summary: An MTurk study of people in the United States (N=395) found median estimates of 1%, 5%, and 20% for the chance of human extinction in 50, 100, and 500 years, respectively. People were fairly confident in their answers and tended to think the government should prioritize preventing human extinction more than it currently does.

The aims of the study

How much the government does and should prioritize preventing human extinction

People in the EA community are very concerned about existential risk, but what is the perception among the general public? Answering this question is highly important if you are trying to reduce existential risk. Understanding people’s thoughts on existential risk may help explain why the issue has been neglected and suggest ways to change this. It is crucial for movement building and considering how to approach the issue with key decision makers.

Some studies have been conducted to address the question of what people think about existential risk, but the results have been inconclusive. In 2017, Spencer Greenberg conducted several studies using Amazon Mechanical Turk and obtained median estimates for the likelihood of human extinction in the next 50 years ranging from .00001% to 1%, with means ranging from 11% to 18%. The percentage of people who estimated a 50% or greater likelihood of extinction within 50 years also ranged from 11% to 18%. Randle and Eckersly (2015) surveyed 2073 people across the US, UK, Canada, and Australia in 2013 and found that 24% rated the likelihood of human extinction in the next 100 years as greater than or equal to 50%.

Getting reliable answers for this type of question is notoriously difficult. The wording of the questions has differed across studies, potentially affecting the result. However, the results may vary even when the wording is held constant: Greenberg’s median estimates of 1% and .00001% were both obtained from samples of over 200 people on Mechanical Turk, and the wording of the question was the same in each case. You can view a comparison of the wording and results across his studies here. The way questions are presented adds another level of variability to the answers. Greenberg provided participants with a list of options, and six of the eighteen options were less than 1%. In the study by Randle and Eckersly (2015), on the other hand, 1% was the lowest option available. What’s more, they provided verbal descriptions with the odds, including “No chance, almost no chance” for 1 in 100 and “Slight possibility” for 2 in 10 (!). In the current study, participants were asked to type in a percentage, rather than being given options to choose from.

I hypothesized that the variability in results might be due to people not having strong opinions on the subject and being uncertain about their answers, so I asked people to indicate how confident they were in each of their answers. I also wanted to test whether phrasing the question in terms of going extinct (as Greenberg did) or being wiped out (as Randle and Eckersley did) would affect the responses. Finally, I wanted to start exploring how much of a priority people think preventing human extinction should be for government and whether that answer is correlated with their estimate of extinction risk.

The aims of the study were to:

The survey was administered via Positly, drawing from Mechanical Turk workers in the USA. Mechanical Turk was chosen for the ease and speed of getting responses, and because published work in psychology suggests that results obtained through Mechanical Turk are generally reliable (Paolacci et al. 2010, Buhrmester et al. 2011, Mason & Suri 2012). The survey was live on Positly on July 24, 2018, with title “Risk to humanity” and description “This short questionnaire is part of a study I am conducting as an intern at the Centre for Effective Altruism. Participation is voluntary, and you can quit at any time. The anonymized results will be published online.”

After excluding data from people who entered a number greater than 100 for any of the questions asking for a percent, there were 395 participants (247 F, 158 M), whose data is analyzed below. Participants ranged in age from 19 to 79, with a median of 36 and mean of 39. 55% of participants had completed a bachelor’s degree or higher, and the median self-reported income was $40,000 to $59,999.

The survey was created using Guided Track. Participants were asked about the likelihood of humans going extinct in 50, 100, and 500 years (presented in a random order). After each of these questions they were asked how confident they were of their estimate. Then they were asked (in a random order) how much the government prioritizes preventing human extinction and how much they should prioritize it. More details about each question and its results are presented below.

Participants entered their numeric answer into a text box embedded in a sentence. There was no set range, and if a participant entered a number greater than 100 for any of the questions, their responses to all of the questions were excluded from the analysis.

How likely is it that humans will be wiped out in the next 50 years?

There is a ___ percent chance that humans will be wiped out in the next 50 years.

The estimated risk of extinction increased as the time scale increased, as can be seen in the table and box plot below. The variance of the responses was also much greater for the 500-year estimate. Responses were not significantly different between the groups receiving the “go extinct” and “be wiped out” versions of the questions, so I analyze the data from those groups together. 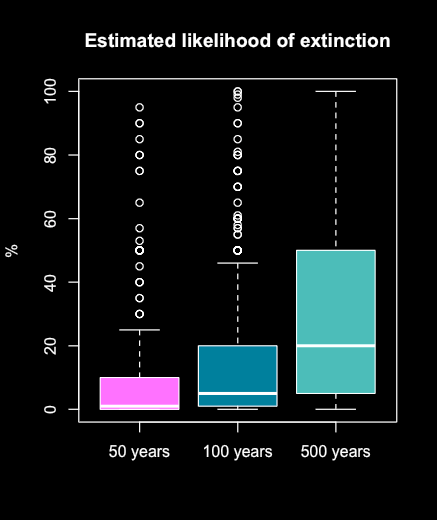 In the box-and-whisker plots above, the thick lines represent the medians, and the boxes show the middle 50% of the data. The whiskers are drawn at a distance of 1.5 times the interquartile range away from the median or at the minimum and maximum, whichever is less extreme, and any more extreme values are plotted as circles.

After each of the questions about the likelihood of extinction, participants were asked to rate their confidence using a slider with values from 0 to 100. The 0 end of the scale was labeled “I have no idea” and the 100 end was labeled “I am totally sure”, but no explicit instructions were provided about how to interpret the scale. The question presented the estimate they had just given and used “go extinct”/​”be wiped out” as before.

How confident are you that there is a 1% chance that humans will go extinct in the next 100 years? 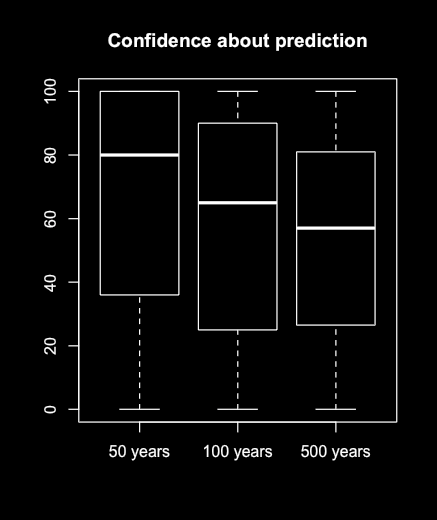 How much the government does and should prioritize preventing human extinction

There were weak correlations between participants’ estimates of the likelihood of extinction over each time frame and how much of a priority they said preventing human extinction should be for the government (r = .19, .18, and .18 for 50, 100, and 500 years respectively; p < .001 for all three).

Positly asks participants for feedback after they complete the survey. In addition to choosing a generic category such as “interesting and enjoyable” or “annoying or aggravating” (only 7 picked the latter option), participants can enter free text responses. Approximately 94 people said that the survey was thought-provoking (or something similar), 70 commented that it was different from other surveys/​MTurk work, and 49 said that they rarely or never think about the issue of human extinction.

Returning to the aims of the study:

The median estimate of the risk of extinction within 50 years (1%) was within the range Greenberg found in his Mechanical Turk studies (.0001% to 1%). It is worth pointing out the difference in format once again: Greenberg had participants choose from a list of options, whereas I asked them to type in a number. Few people gave answers between zero one percent (5%, 4%, and 3% of people did so for the 50, 100, and 500 year questions, respectively). Many more people said there was a 0% chance of extinction over the specified time range (34%, 20%, and 7% for the 50, 100, and 500 year questions, respectively). The responses of 0% might represent a belief that there is no way we will go extinct in the specified time range, but it is likely that many of them are because of people rounding their answer to the nearest whole percent--1% was also a popular choice (19%, 12%, and 9% of respondents for the 50, 100, and 500 year questions, respectively).

The proportion of people who put the chance of extinction in 50 or 100 years at greater than or equal to 50% was smaller than in Greenberg’s or Randle and Eckersley’s studies (6% versus 11 to 18% for 50 years, and 13% versus 24% for 500 years). Nonetheless, it is worth noting the wide spread of the responses and the tail of people assigning large probabilities to the human extinction in the near future.

I also expected that people’s confidence in their answers would be quite low, since I had conducted a few interviews in which I asked about the likelihood of human extinction in the next 100 years, and the interviewees typically expressed a great deal of uncertainty about their estimates. Contrary to my expectations, however, the survey respondents did not generally report great uncertainty about their answers, and many people reported complete confidence in their predictions. This is some evidence against my explanation that the variability in survey results might be due to people having no idea of the answer and just picking something out of the air. However, the large number of people who, without prompting, wrote in the comment section that they had rarely or never thought about the topic suggests that we should not discount that explanation too strongly.

Methodological issues may account for the finding—a slider with such precision may not have been an intuitive or informative way to ask about confidence/​certainty, etc. More sophisticated ways of asking about confidence and/​or testing how the beliefs change when presented with new evidence, could produce more conclusive evidence on the strength of these beliefs.

No, this wording did not make a difference.

On the whole, people expressed that the government should prioritize preventing human extinction more than it currently does. Participants’ estimates of the likelihood of extinction were correlated with how much of a priority they think it should be for the government, but only weakly.

More research would be needed to determine what policies people would support and how they would rate preventing human extinction relative to other priorities. Future research could also attempt to disentangle the issues of budget and priority, which were confounded in this study because the lower end of the scale mentioned “resources” and the upper end said “prioritize”. People might think that it should be a strategic priority but should not be given a large share of the budget; this came up in the interviews I mentioned above.

It is worth bringing up the comments section again: many people said the topic of the survey was thought-provoking, unusual, and/​or something they don’t tend to think about. Combining these comments with the finding that people think the government should be doing more to prevent human extinction suggests that the issue might be neglected ont because people think it’s unimportant but because they just don’t tend to think about it at all, or at least not seriously.

1. I did this project as part of a research internship at the Centre for Effective Altruism.

2. I will be without internet for several weeks after tomorrow and will respond to comments when I return.