By: Katie Gertsch and Tee Barnett

The annual EA Survey is a volunteer-led project of Rethink Charity that has become a benchmark for better understanding the EA community. This is the fifth article in our multi-part EA Survey 2017 Series. You can find supporting documents at the bottom of this post, including our previous piece on community demographics, prior EA surveys, and an up-to-date list of articles in the EA Survey 2017 Series. Get notified of the latest posts in this series by signing up here.

This article brings EA demographics back by popular demand. As in, demand for the metrics not covered in the previous post. We hope you enjoy this second look.

While diversity comes in many forms, especially in a definitional sense, EA is unlikely to be characterized as racially diverse according to this survey. There may be considerable margin for error in these findings, not the least because such a large proportion of respondents did not answer. But the trope of EA being a predominantly white (89%) and male (70.1%) community, however, is not likely to fade anytime soon without directed effort.

A longitudinal analysis of the community’s racial composition cannot be conducted because no data on race was gathered in the 2015 survey.

Want to contribute more to this discussion? We recommend joining the Diversity & Inclusion in EA group on Facebook.

A crosstab of declared racial identity according to location revealed a vast white majority across the top five EA hubs around the world. New York City emerged as the most racially diverse EA hub in the community. This was statistically significant with p = 0.02, but it’s not clear how much we can read into this.

Left-leaning EAs composed 64.8% of respondents, while ‘Centre’ (8.1%), ‘Centre Right’ and ‘Right’ (3.3%) accounted for a considerably smaller portion of the sample. Libertarian EAs constitute a sizeable proportion of the sample (8.7%) a small group (6%) explicitly chose not to answer, and 9% refused to identify with any of the political spectrum. These percentages do not include the 785 people who took the survey but did not answer this question. 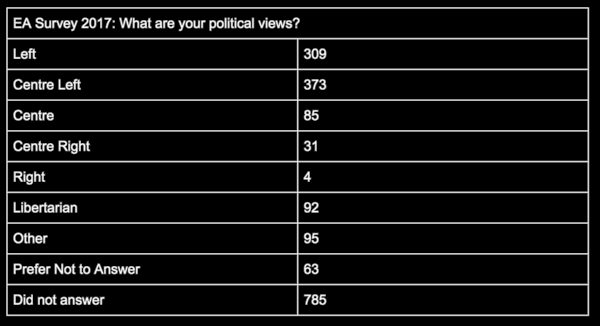 Data on political preference was collected but not published in the 2015 EA Survey report, allowing us in 2017 to present longitudinal data on community-wide shifts in political orientation. 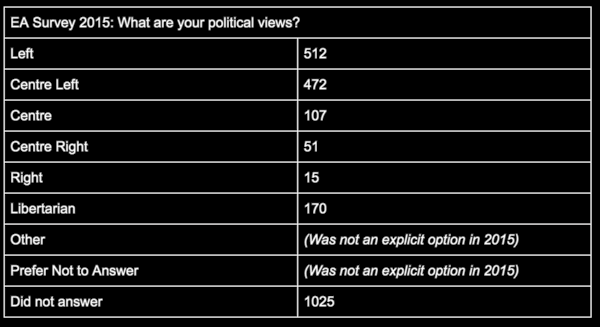 Want to contribute more to this discussion? We recommend joining the Effective Altruists Discuss Politics group on Facebook.

Politics and cause area preference

When looking at the relationship between politics and other areas, we broke down political orientation into whether someone identified with the “Left” (i.e. they said they were “Left” or “Centre Left”) or did not identify with the left (i.e., they picked a different option like, “Centre”, “Centre Right”, “Right”, “Libertarian”). “Other” and “Prefer not to answer” were dropped from this variable. We found 682 respondents who were associated with a left-leaning position (left), 212 respondents who were not associated with a left-leaning position (non-left), and 943 people with no position.

Despite the San Francisco Bay Area being anecdotally associated with libertarians, it had the highest amount of people identifying with the left, with 82.9% of Bay Area respondents. Of the other five largest EA cities, London was 80.85% left, Oxford was 76.92% left and Boston was 73.53% left, and New York City was 63.64% left. However, despite these percentages of left appearing quite different, there was no statistically significant trend in left vs. non-left that we could pick up in our data.

Results show a significant difference according to political affiliation, where 48.9% on the left identified as vegetarian or vegan, while only 29% on the non-left did.

This makes sense in the light of the above, looking at politics and cause area preference, where we see a significantly greater proportion (41%) of people on the left putting a high priority on animal welfare, compared to a smaller proportion sharing that level of priority from those on the non-left (28%).

Age and cause area preference

Employment status responses were lead by for-profit work (43.7%) and non-profit organizations (17.0%). There were similar numbers for self-employed (9.5%) and academics work (9.6%). Unemployed respondents made up 7.7%, while 6.8% reported working for a government entity, and 1.2% were homemakers. Those who are financially independent, through savings, passive income or a providing partner accounted for 4.6%.

Pardoning 2017 for being the current year, the last few years appear to have been strong for EA recruitment, though there may also be a survivorship bias with EAs who joined in previous years no longer identifying with EA or take the EA survey. Post-2013, we see double-digit percentage growth in the number self-identified EAs joining the community.

Some additional metrics on EA movement growth from Peter Hurford and Joey Savoie is available in “Is EA Growing? Some EA Growth Metrics for 2017”.

Post written by Katie Gertsch and Tee Barnett, with edits and analysis from Peter Hurford.

I Distribution and Analysis Methodology

Please note: this section will be continually updated as new posts are published. All 2017 EA Survey posts will be compiled into a single report at the end of this publishing cycle