The annual EA Survey is a volunteer-led project of Rethink Charity that has become a benchmark for better understanding the EA community. This post is the fourth in a multi-part series intended to provide the survey results in a more digestible and engaging format. You can find key supporting documents, including prior EA surveys and an up-to-date list of articles in the EA Survey 2017 Series, at the bottom of this post. Get notified of the latest posts in this series by signing up here.

Our earlier post presented declared preferences among respondents, and donation reporting allows us to further contextualize behavioral trends within the EA community. The most recent survey of 1019 individuals collected donation data on both 2015 and 2016 donations. The survey was not distributed in 2016.

This post aims to compare donation data of the EA community, and within a couple specific subpopulations. You can find donation data according to cause area and organization preference in our ãCause Area Preferencesã post.

How Much are EAs Donating?

Relatively high average donation rates seem to be commonly associated with effective altruists. So how much are EAs donating?

Self-described EAs in our survey reported more than $6.6m in total donations to effective charities for 2015, and more than $9.8m in 2016. We standardized all the donations into US dollars and found that the average 2015 donation was $6,498 among respondents, while the average donation in 2016 was $9,510. These seemingly impressive are seriously skewed upward by a few major donors.

To help visualize the distribution of donation amounts, letãs look at it in terms of deciles. In other words, how much you would have to donate to be in the top X% of donors based on the reports that we have from the 2016 data. 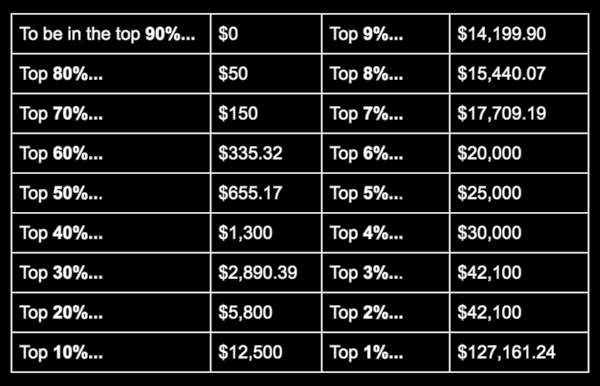 In order to top the highest donation in our registry, you would have to donate over $1,934,550.

According to the survey, EA donations are highly skewed toward a handful of major donors. Many individuals could make it into the top 50% of EA donors by donating a small percentage of their income, but only a distinct minority are capable of making it into the top 1%.

These donations may be overreported, given that who donate less might be less inclined to share that information. We found, however, a relatively more forthcoming sample than expected. Among those who reported on donations, 29% in 2015 and 16.4% in 2016 reported donating $0.

If you made donations not reported in the survey, please report them via the EA Donation Registry, which allows you to anonymously contribute to the public total for the EA communityãyou can also share your own donations to inspire others.

The mean percentage of income donated was 7.98% of in 2016[2], but again this is skewed. The median is 4.28%. While this may seem low when benchmarked against the 10% commitment of the Giving What We Can pledge, it is higher than the United States national average of around 2% of GDP[3]. To better illustrate the point, letãs look at how many people donate at or above a certain amount of income. Since many neglected to reveal their income, or made less than $10,000, this is based on a sample of 597 EAs.

It is also possible that people compensate for 2016 donation deficits by donating more at different times. Note also that this finding also doesnãt capture the EAs that are saving now while waiting for better causes to donate to later.

Donations Among Earning to Give

Perhaps one of the more prescient questions in the community is how much ETG individuals are donating. This question includes all individuals who plan to pursue, or are already involved in ETG careers. In 2015, donations among the 405 ETG individuals in our survey totaled $4,210,633.29. In 2016, donations totaled $5,672,334.74.

To look at how donation behavior changes between a subset of individuals, rather than among EA as a whole, we were able to follow a specific group of EAs who took both the 2015 and 2017 EA Surveys[4].

The table above reflects consistent year-on-year growth in donations among 184 individuals we tracked across the last three EA surveys. Itãs worth noting, however, there is survivorship bias in this group, as EAs who cease donating might also be less likely to take the 2017 EA Survey.

[1]: The median increase is smaller than the difference between the medians for each year, because it only includes people who donated in both years.

[2]: Percent income percentages were performed only for people with income greater than $10K, as donations as a percentage of income became quite absurd with low incomes, including many people donating without any income at all. This was chosen prior to any analysis. Income here refers to self-reported individual income, as opposed to household income.

[4]: The 2014 and 2015 EA surveys covered donation data of the prior year, while the 2017 EA survey covered 2015 and 2016 donation data. For everyone in the 2015 EA Survey and 2017 EA Survey who provided an email address, we hashed their email address using the MD5 hashing function and matched up email addresses between survey data while still ensuring anonymity. This variable is available as `ea_id` in all the public datasets. 180 people could be matched up between 2015 and 2017 surveys and 18 people could be matched up between all three surveys (2014, 2015, and 2017).

Post written by Huw Thomas, with edits from Tee Barnett and analysis from Peter Hurford.

I Distribution and Analysis Methodology

VIIIãHow do People Get Into EA?

Please note: this section will be continually updated as new posts are published. All 2017 EA Survey posts will be compiled into a single report at the end of this publishing cycle