Here is Charity Science’s one year review, cross-posted from our website for those of you interested in reading about our progress so far.

In this internal review, we describe and evaluate Charity Science’s progress after its first year of operations. We mainly focus on the most recent 6 months, as we have already shared information on and results from our first 6 month experiment. However we have compiled yearly totals for important metrics such as money moved to effective charities.

This review focuses on hard metrics rather than offering an in-depth narrative description of the lessons we have learned or how well we felt specific fundraising strategies succeeded. That information is linked to in the section below describing our experiments.

We also want to thank our volunteers and donors for making it all possible. This could not have been accomplished without everybody’s combined efforts. This report is a list of everything we have managed to achieve. We look forward to seeing how many people we will be able to help next year.

We view money moved as the best reflection of awareness of and support for our proven charities. Here are the goals we have previously set for this:

In-depth reports on our experiments

Here are the experiments we have conducted, with reports and data on them:

Here is a rough timeline of our activities so far:

We spent about 3 months working full time on planning and reviewing charities as well as some unrecorded time before we started working on this project full time. During this time we also worked on re-branding and getting charitable status.

We spent about 12 months doing full time fundraising, with the team spending about 78 hours per week on this. The breakdown of this time was as follows:

Here is a breakdown of our time over the most recent 6 months: 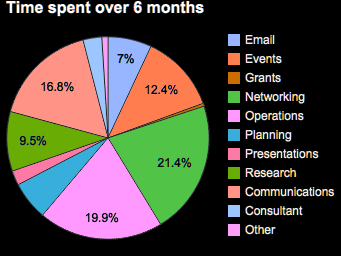 A breakdown of our time over our first 6 months can be seen here.

The total cost of these activities (including salaries) was around $15,000. This is lower than the total we spent as we spent a portion of our personal savings to cover various costs.

We spent about $12,000 on salaries (three full time staff, two of whom worked full time on these fundraising projects), and about $3,000 on other expenses. At some points we experienced financial pressures due to not receiving a large donation which we were expecting. We plan on raising more money for operating expenses at the start of 2015 to guarantee that this does not happen again and slow down our work. 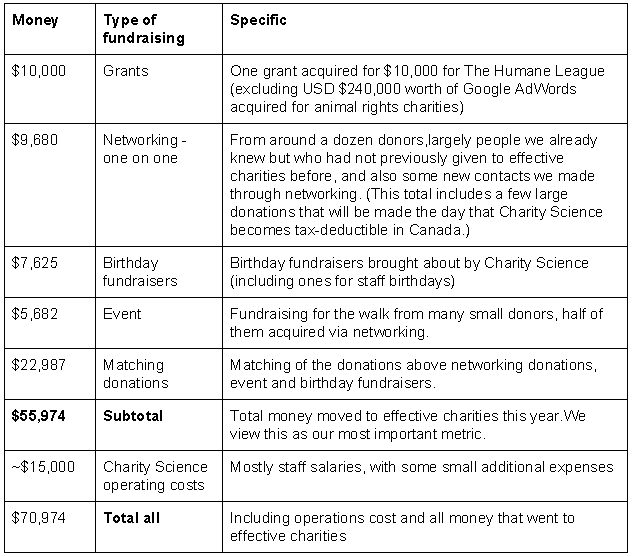 These figures are in Canadian dollars. More donations are coming in in these categories, so we will update them periodically to reflect this.

The totals above exclude $5,875 in donations ($11,750 counting the match) and the Google Grants that we obtained for various charities, because it was unclear whether these would have happened without our work, and unclear how much money in donations a Google Grant is worth. We suspect that many organizations would include these numbers in their totals. We also expect that several donations were made that we were unable to track this year due to our directly pointing people to GiveWell or to our proven charities, but we do not have a concrete estimate of their total size. We only counted donations for which we had tax receipts (or other solid proof that the donation was made), and which we were convinced could be attributed to a Charity Science staff member or volunteer project.

This is the total counterfactual amount donated over the last 6 months, organized by which charity it went to. Evidence Action got the most donations due to being the charity for which we fundraised through our charity event. SCI did not get very much due to us mainly promoting Evidence Action as the deworming charity and GiveDirectly as the cash transfer charity.

Below is a chart of the total amount moved to each charity (including funds from the match) over the last year to provide a visual sense of which charities got the most donations. 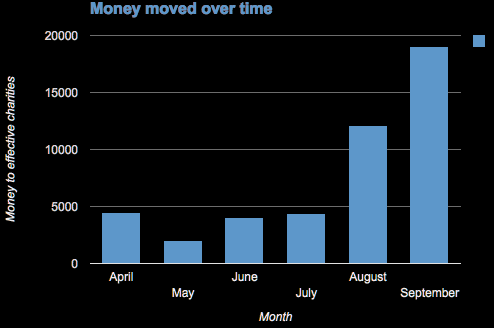 The large boost later on is mainly due to our Charity Science Walk (in September) and scaling up our birthday fundraising campaign (in August and September).