I learned a lot from the pledge drive, and will likely make at least 2 more posts, one suggesting process improvements for the next pledge drive, and the other analyzing pros and cons of paid Facebook advertising.

Because there were so many different people who contributed, and different people have different privacy settings, I’ve tried my best to scrub identifying details in this public post whenever possible. Please understand that I have no problem with giving people full credit for their work, and would love to publicly thank you for them. In addition, this summary is a work in progress, and I probably missed a lot of the very important work related to the drive that I’m less familiar with.

Giving What We Can ran a pledge drive to get as many people as possible to take the pledge or Try Giving in the same time frame, between December 10th 2015 and January 10th 2016. The drive encouraged somewhere between 60 and 90 additional people (who otherwise would not have taken it during the same time period) to take the Giving What We Can pledge, and also a smaller number of Try Givers. This is the second pledge drive: the first one was held in 2014⁄5 and organised by Ravi Patel from GWWC Cambridge.

Approaches We Tried
We used a multi-pronged approach to get as many people as possible to be excited and willing to take the pledge. Most of these approaches mobilized volunteer effort of the Giving What We Can and EA community.

Mobilizing the Giving What We Can community

There were many times when we asked/​mobilized the general GWWC and EA community to help. We set up an excel sheet for people to record contacting their personal networks (to keep them on track and minimize overlap). Eleanor Stephens also wrote a nice post on how individuals can help with the pledge drive, which was promoted on Facebook to followers of GWWC’s page and shared on the GWWC Community Facebook group. We also set up a “Pledge Event Organizers” Facebook group.

Contacting EA Leaders
We had an internal list of 20-30 “EA Leaders” (people exceptionally involved in EA Movement-building) who we asked to help share information about the pledge drive. We have received mostly positive responses and have had a lot of help from leaders of other EA organizations, etc.

Reaching out to EA Bloggers
We reached out to many different EA bloggers, asking them to write about the pledge. Many of them agreed, for example unitofcaring and Jaibot. We also had GWWC blog posts by: Ali Ladak, Eleanor Stephens, Zach Leather. Some bloggers have also very kindly written posts without prompting from anybody in GWWC, for example ThingofThings.

Celebrity Outreach
I started a concerted campaign where we tried to get access to “celebrities”-writers, journalists, artists, bloggers and other people whose influence vastly exceeds the monetary value of their donations, on the fringes of EA. While we didn’t manage to talk to many of the people I wanted (which is hardly a surprise!), two journalists and an artist have agreed to take the pledge and potentially do an interview with us. Hopefully we’ll be able to get those interviews up soon!

Media
Unfortunately, despite our best efforts, we were unable to obtain significant media attention for this pledge drive. However, aside from the two journalists already mentioned, 2 other journalists (from fairly prominent publications) have expressed an interest in covering us in the future. There are also 3 articles out on Huffington Post, by Jacy Reese from Animal Charity Evaluators, Daniel Selwyn, and myself.

Local Meetups/​Chapters
Many of the GWWC chapters and local EA meetups and pages have helped promote the Giving What We Can Pledge Event by sharing our articles, links, and personal messages. GWWC Cambridge was especially impressive, they created a video for the drive (see below) and posted pictures of people who have taken the pledge every day, Humans of New York-style. This seems like an incredibly effective way of showcasing how human GWWC members are, and I will highly encourage other GWWC chapters and EA meetups to try it too.

In addition, both EA London and EA Madison (my local meetup) organized local meetups to talk to people about the GWWC pledge and encourage people to take the pledge/​Try Giving, with very positive results.

Video
Giving What We Can: Cambridge created a short, very light-hearted silent movie to encourage people to take the pledge! The video has 1654 views (To be fair, I don’t know how many of them were from me) and 62 likes. It’s a really cute, fun video.

Progress over Time
Here I include a chart of GWWC’s progress during the pledge drive. If you want to learn more about GWWC’s progress, you can check out the dashboard yourself. 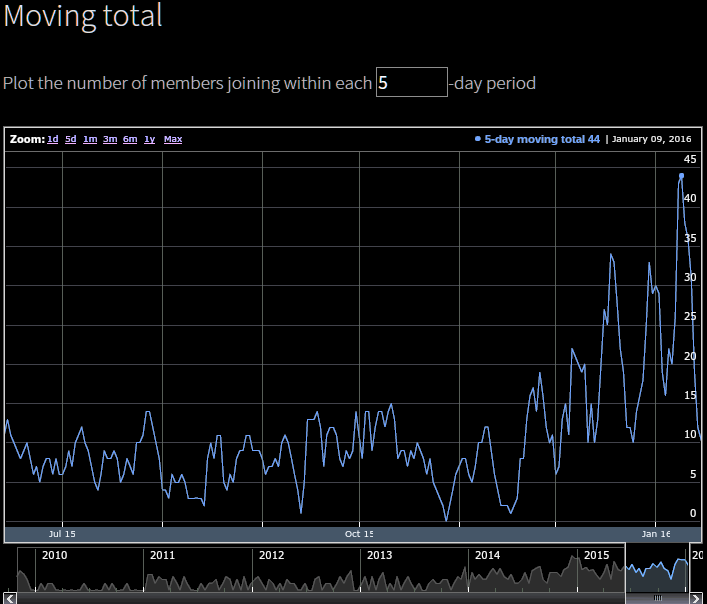 I included data from July 2015 onwards so people have the appropriate reference class, and used 5-day moving averages to smooth out spikes. There was a dip right after the pledge drive started, followed by a peak about a week in (December 18th/​19th), followed by a large dip again for Christmas, and a peak in the last days of December/​Jan.1st. There’s a dip in the early days of January but the number of pledgers grew very quickly near the end of the pledge drive, cumulating in 17 people pledging on the last day of the drive (Jan.10th), or about half the average number of new pledgers a month in 2014.

Workload/​Timeline
Jon Courtney and Marinella Capriati (GWWC staff) have been working on setting up the event, coordinating with chapters, and EA Outreach since October 2015. The core “pledge drive team” also includes Harri Bescelli, Eleanor Stephens and I (volunteers) who worked primarily during this event. I volunteered essentially full-time from December 10th to January 10th. In total, I estimate about 2.5 person-work-months spent on this pledge drive (one from me, 1.5 from the rest of the team).

We also had help from dozens if not hundreds of EAs/​GWWC pledgers with technical help, sharing our articles, retweeting, writing personal stories and posts, about why they took the pledge and entreating friends to do the same, etc, etc. I can’t imagine how to estimate this time.

Impact
We can’t really have a good gauge on our counterfactual impact until people who took the pledge during our pledge drive have been interviewed. That said, there are some ways to estimate it. For example, counting people who marked themselves as “attending” or “interested in” the Facebook event, as of Jan.12th, 66 of them have taken the pledge on or after Dec. 10th 2015, and 13 of them have “Tried Giving” on or after December 10th. 66 may not necessarily be the lower bound, for example some people may have decided to take the pledge in December already and then just signed up for the FB event after hearing about it as an afterthought.

Another way to gauge the impact of our event is to look at before/​after. Giving What We Can has about 1400 members (+-5) as of December 10, 2015, and 1555 by the end of Jan.11th, 2016, or a difference of 155. Eyeballing the dashboard, there usually isn’t a spike in the number of pledges in December outside of the two drives, suggesting that the base rate of 50-60 people per month in 2015 is the appropriate counterfactual to consider if we didn’t have a drive. So just looking at before/​after rates will suggest that the impact of the pledge drive is on about 90 people rather than 66. One plausible reason why people may be inspired by the resources from the pledge drive (blog posts, in-person explanations, etc.) but did not take the pledge is that they don’t have a Facebook account, another is that they’re very private, a third is that our resources didn’t explicitly emphasize the value-added of the FB event.

That said, 90 is not necessarily the upper bound for the long-term impact of this pledge drive. For example, we’ve had 3 HuffPo articles and many different blog posts come out of this pledge drive, which may marginally increase people’s likelihoods of pledging in the ensuing months if not years.

Note that even more so than the rest of the post, this is #justmyopinion, and does not represent the official view of Giving What We Can.

So the most naive way to look at our impact is by just adding up the total pledged donations ($17.5 million, plus Try Giving that hasn’t been added) from all the people who marked themselves as “attending” the FB event. Not bad for 2.5 work-months!

But this is still somewhat naive. If most of the new pledgers would have ended up taking the pledge anyway, the real counterfactual impact is the delta in how much sooner this pledge drive has resulted in people taking the pledge. For example, if you guesstimate that the average is one year, then the internal estimation of how valuable this pledge drive is could be as low as 66*$600/​40=$990! However, I think that this is too pessimistically low for three core reasons: 1)Haste consideration means that hearing about this pledge now is worth more than hearing about the pledge later, 2)The “average” of one year is too low: the median might be around there, but the right end of the counterfactual tail could end up being really high, 3) “just hearing about” the GWWC pledge sometimes happens, but a lot of the time it takes staff or concentrated volunteering time. So many of the people who counterfactually would not have heard of the pledge in the context of the pledge drive would probably have taken up staff and volunteering time longer down the line.

In conclusion, the value of the pledge drive relative to other activities GWWC could undertake is inconclusive, but I’m relatively confident (95%+) that it is more worthwhile than 2.5 person-months spent working at a “typical” job and donating to top GWWC charities.