Animal welfare work has the potential to be much more cost-effective than work on global poverty. While it depends greatly on how much you value a human compared to a nonhuman animal, the suffering in factory farms appears quite severe and the scale of factory farmed animals ( ~9-11B in the US, many more globally[1]) is greater than the total world population, over 10x the number of extremely poor people, and over 40x the number of people affected by malaria.

Based on this, some have suggested that the only reason to think that animal welfare doesn’t dominate global poverty is speciesism, or the belief that nonhuman animals do not have significant moral worth.

Keep in mind, however, that I think it could entail this conclusion, not that it actually does. I use “X could be true” in the sense of it is possible that X or it is reasonable for some people to think X based on what we currently know. I do not use it in the sense that X is more likely than not or I believe X and you should too.

The Range of Global Poverty Interventions

In “On Priors”, Michael Dickens graphed the list of cost-effectiveness estimates from the DCP2 and found an exponential curve in terms of $/​DALY (blue is the minimum estimate, red is the maximum estimate): 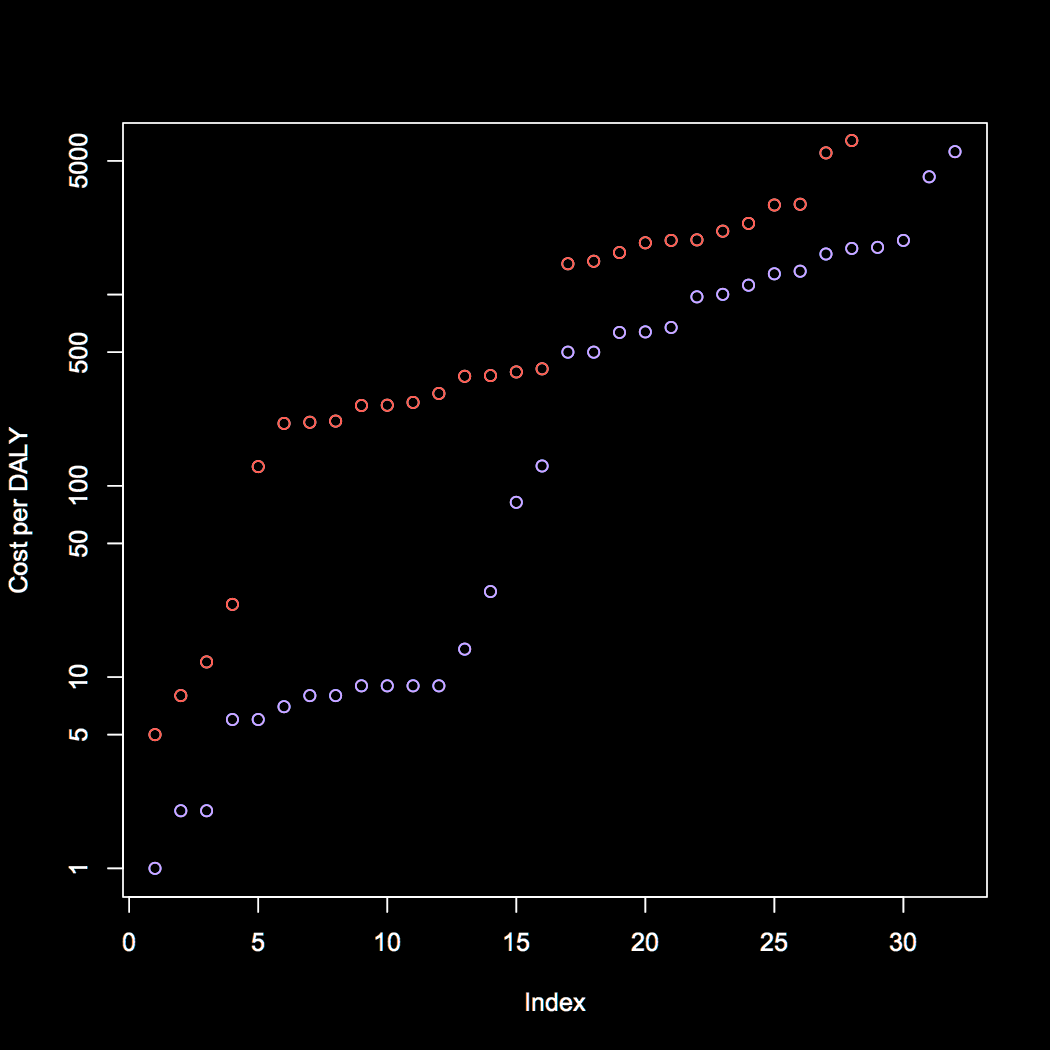 While there are good reasons to not take the DCP2 estimates too literally, we’re lucky there’s a large wealth of research on global health interventions which allow us to make reasonable attempts at ranking different interventions in order of their cost-effectiveness.

Comparatively, there is very little research on how to best improve animal welfare, and what research that does exist has historically lacked control groups, been statistically underpowered, and suffered from many other problems (see Section 4 of “Methodology for Studying the Influence of Facebook Ads on Meat Reduction” for a good review).

The largest scale RCT on animal advocacy to date was only powered enough to rule out a rate of 4.2% or higher at 80% confidence , though we aren’t sure how much lower the true conversion rate is or if there are other interventions with a bigger success rate. If we were to come up with some sort of DALY vs. intervention graph for animal rights, what would it look like?

We’re likely smart enough to exclude interventions that are likely to be quite inferior from a scale perspective, like farm sanctuaries, we still likely face a large range of potential cost-effectiveness. While we don’t know yet if the shape is logarithmically distributed like it appears to be for global health interventions[3], it seems to me that a lot of the interventions that “smart money” would pick include the possibility of no impact (being actually worthless) and net negative impact[4] (actively causing more harm per each dollar spent), even before considering their possible far-future effects.

Extending to the Far Future

At this point there’s still an open question about how to extend this to the far future. This is quite hard for reasons that Michael Dickens points out in “Are GiveWell Top Charities Too Speculative?”—while we might have a pretty good idea of what the near-term effects of GiveWell top charities are (namely, less malaria, less parasite infections, and more wealth) and we might have some idea of the medium-term effects (more economic growth, essentially no net population growth), we have no idea of the long-term effects and this could dramatically change the overall cost-effectiveness.

This undermines the “strength of evidence” approach in favor of global poverty, but there still are many plausible views one could make that suggest global poverty comes out ahead. For example, one could reasonably think that…

It’s not clear to me which of these views, if any, are correct, and I hope to explore them a lot more, including the many other view that I did not write down here. However, it is clear to me that one could reasonably think that global poverty is more effective than animal advocacy, even while agreeing that nonhuman animals have significant moral value, based on the principle of comparing the best intervention to the mean intervention.

[1]: I’ve heard numbers around 60B (for one example, from ACE, though I’ve also heard it elsewhere), but I’ve never been able to track down an authoritative citation for this (nor have I tried particularly hard). However, I don’t think the precise number is that important for this analysis.

[2]: I think this analogy can be similarly extended to most other causes where there isn’t much evidence yet to pick among a large range of potential interventions, many of which are of zero impact or net negative.

[3]: I’m pretty curious what the overall shape of interventions plotted against cost-effectiveness would look like. I think in the case of nonhuman animal advocacy there could be reasons to think that the shape could look pretty weird if there is a large possibility of net-negative effects[4] or if many messages had roughly the same outcome (for example, maybe online ads and pamphlets are roughly equally persuasive).

[4]: This would be possible if, for example, it were true that caged-free campaigns result in a lower living standard for hens (though see the response from Bollard and ensuing discussion ) or if Direct Action Everywhere’s confrontational activism approach actually drove people away from animal rights. Both of these seem plausible enough to me to introduce negative values into my confidence interval for their cost-effectiveness estimates, even if I don’t think they are more likely than not.