In order to understand what types of content CEA’s target audience already consumes, we investigated which Twitter accounts are most followed by a proxy for that audience. We used intellectual prizewinners (IPWs) such as Rhodes Scholars as a proxy for especially promising students and young professionals. The hope is that by examining who is already successful at reaching IPWs, we can better reach them ourselves.

This document describes our results and we are also publishing the underlying data set. We hope that they are useful to others in the EA community, and that the data set itself can serve as a basis for research done by other parties. Our major findings are:

CEA works to help especially promising students and young professionals (our “target audience”) become highly engaged with EA. From the perspective of the EA Forum, EA Newsletter, CEA social media, and other content, we need to understand what types of communication attract/​repel this target audience.

Many other organizations also support promising young people. For example, the Hertz Fellowship targets “the nation’s most promising innovators in science and technology”. There are numerous other intellectual scholarship and competition programs with similar audiences; in the rest of this document, I will refer to winners of these programs as “intellectual prizewinners” (IPWs). Most of the people CEA wants to support are not IPWs, but there is enough overlap to produce a useful convenience sample.

As an initial investigation step, we scraped the Twitter accounts of IPWs and identified the accounts they are most likely to follow. These are people who seem to already be good at reaching our target audience, which might indicate that we should learn from the way they communicate.

Paul Edward Dollete identified the accounts and Aadil Kara pulled and analyzed the Twitter and Goodreads data. This writeup is by Ben West.

We originally looked at recent IMO participants in the US, UK, France, and Germany, using data from Goodreads, Twitter, Facebook, Instagram, LinkedIn, personal sites, and miscellaneous social media (e.g. Quora, Flickr, Snapchat). However, we had trouble with most of these sources:

This led us to focus on Twitter and Goodreads. 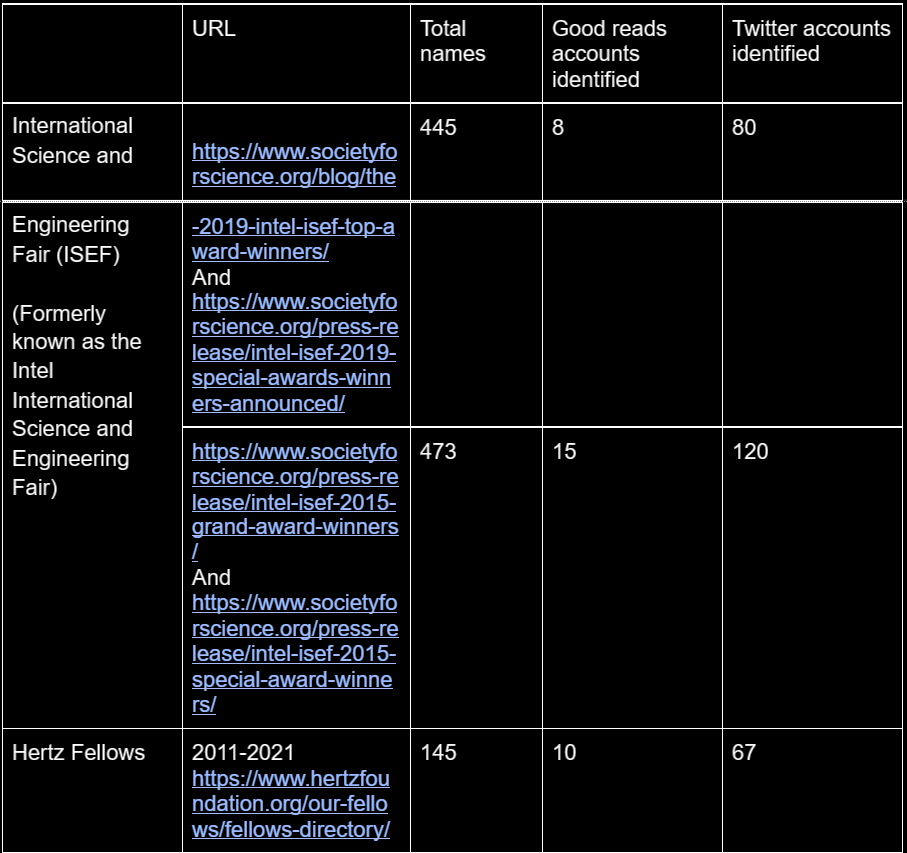 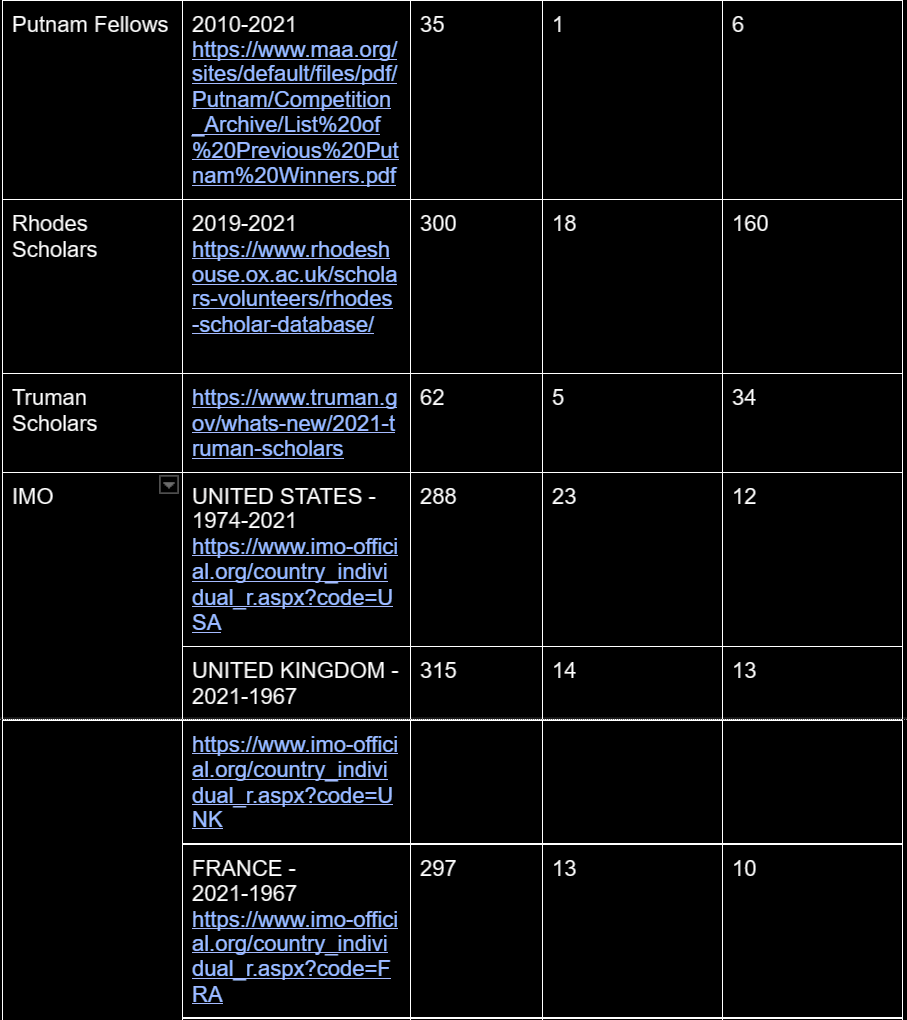 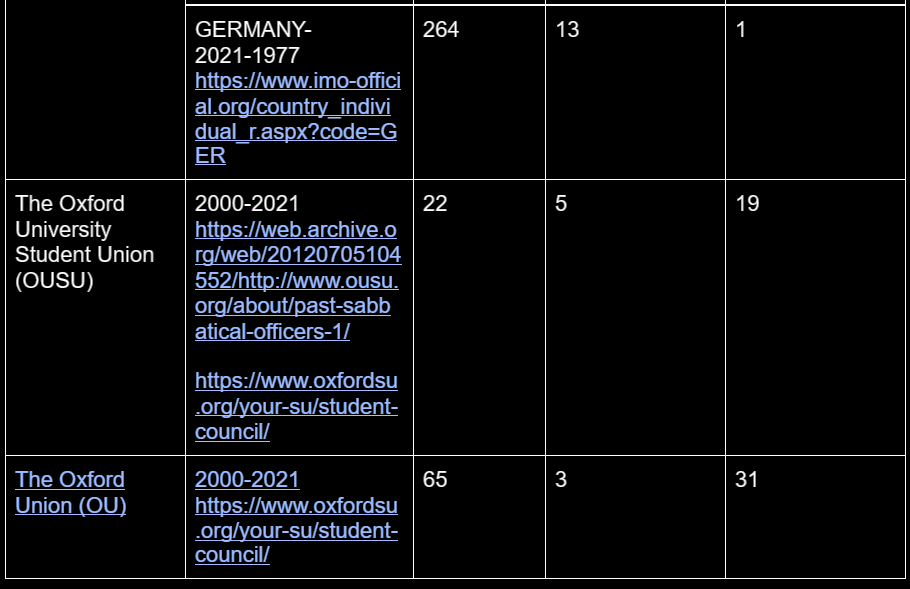 As quality control, I (Ben West) validated a randomly selected subset of the identified accounts. I found:

We only used data which is publicly available. We did not e.g. follow any of these users to get additional information about their accounts. The DataStudio dashboard we’ve made available from this research only displays aggregate information where nothing is personally identifiable.

The IMO data set had an especially low rate of accounts we could identify on Twitter. I suspect that this was driven by us looking further back for IMO – Twitter usage is lower amongst older Americans.

We were able to identify Twitter accounts for the majority of non-STEM IPWs, and as much as 86% of OUSU members had identifiable Twitter accounts. This fits with my stereotype that Twitter is unusually important for people who wish to pursue a career in party politics.

EA has moderate penetration into IPWs – 30% of IPWs follow at least one EA-adjacent influencer.[3] I think this is a bit higher than I would have guessed. Penetration does not seem to be substantially higher in the STEM versus non-STEM data sets, which again surprises me.[4] 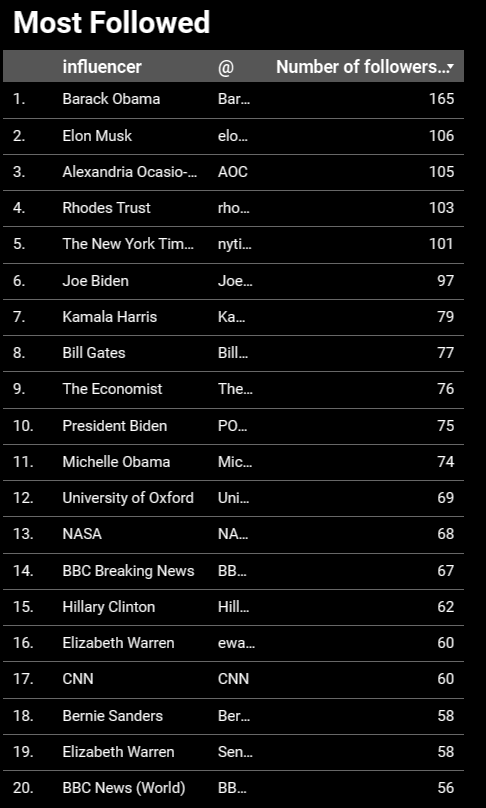 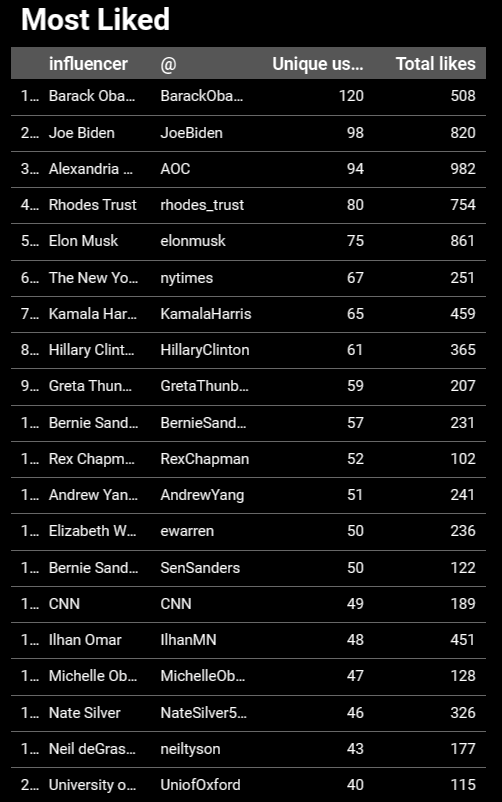 Rather than present a series of static tables, we’ve created a dashboard which lets users filter and manipulate the data themselves. We encourage you to look through the results and comment/​post any interesting findings.

The underlying data is stored in BigQuery; if you need SQL access for more in-depth analysis, please contact me.

We are looking at the most followed accounts, which by definition are skewed towards the “lowest common denominator”. It could be that the influencers IPWs mostly engage with are idiosyncratic, making the “most followed accounts” list representative of only a small fraction of their feeds.

Additionally, Twitter usage may not be representative of IPW media consumption in general. I’ve heard anecdotal evidence that IPWs use social media less than their peers, and if this is true, the people we are measuring might be nonrepresentative in some way.

There are various other confounding variables which might distort the data, some of which I’ve listed as things to explore in the “future research directions” section.

We have also collected the following datasets, which we may publish, depending on how useful people find this one:

My hope is that this dataset will be used by people to answer questions I haven’t even thought of yet. That being said, here are some specific things I have wondered:

The following accounts were defined as “EA-adjacent”: