This was originally written leading up to the 2020 Presidential Election, but has since been updated. Cross posted from https://​​applieddivinitystudies.com/​​2020/​​10/​​06/​​secession/​​

Here’s the scenario once painted by The Atlantic, NYT and others:

Looking back, it might feel silly to have ever worried. Election night ended up being election week, there was a raid on the Capitol, but of course the US wasn’t going to collapse.

I argue that looking at the historical base rates paints a different picture. In our short history, we have already had a revolutionary war, followed shortly by a civil war. Looking across the globe, we see that regimes are much less stable than our lived experiences might indicate.

My overall guess is that the risk of regime-collapse is somewhere around 3% in every 4-year period. This does not feel like a salient risk, but it is reasonably high. A US-collapse would have serious implications for nuclear safety and AI arms races. It is not necessarily a highly tractable cause, but it may be a worthwhile risk to hedge against.

I consider technical forecasting issues in much more detail in the appendices, but first, here are the raw base rates to consider:

US Presidential Elections There have been 58 presidential elections in US history. Only the 1860 election led to secession. Rate: 1⁄58, 1.7%

4 Year Time Span Since the Establishment of the 13 Colonies Including the American Revolution, and counting since the Georgia’s 1732 establishment: Rate: 2/​(288/​4), 2.8%

Many of these rates beg for further qualification. I’ve provided a non-comprehensive list of corrections in the appendices addressing sensitivity analysis, the United States as a non-generic country, and so on.

I’m not going to rehash all the object-level arguments clearly detailed elsewhere. Yes, Trump has said he won’t step down. Yes, there are logistical concerns with mail-in ballots. Yes, there is currently an even number of supreme court justices.

But it’s hard to reason your way from “things seem very bad” to “shit will actually hit the fan”.

Intuitions on the question appear totally split. On one hand, it’s easy to say “there are already mass protests and this would tip the scales.” On the other hand, your uncle says he’s moving to Canada every time a republican is elected, Texas says it’s seceding every time a democrat is elected, neither ever happens. Why should this year be different?

In these scenarios, (high drama, limited information, bi-modal outcomes), it’s useful to turn to base rates.

I counted Independence Referendums since 1900, but there’s no good reason to pick this date over any other.

Here’s the rates we would get if we started counting at other dates. (Data and analysis at this Google Sheet) 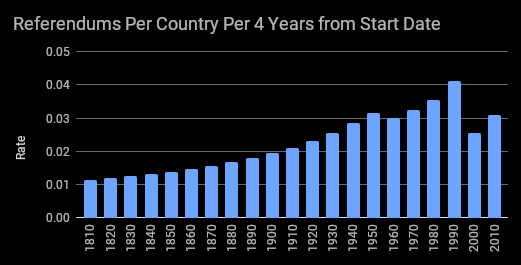 There isn’t a clear advantage to any one start date. If we start counting from 1810, we’re capturing all the available data, but you might argue that the conditions allowing for civil war have changed, and it makes more sense to only count post-WWII, or post Soviet Collapse.

Working with parameterized models, you can pick a Schelling point to reduce the possibility of intentional manipulation, but when possible, it’s better to do the sensitivity analysis.

I’m lucky in that there’s really only one parameter here, so it’s easy to communicate these results as a simple bar graph and get a good intuitive feel for how much our start date matters. In more complex models, this might not be possible.

Since the future is always in some sense unprecedented, it’s not always clear which statistics to use. This is aggravated by American uniqueness. Whatever you think of American exceptionalism as a doctrine, there’s no denying that America is at least odd. Is it in the class of all countries? Democratic countries? Wealthy democratic countries? The reference class we choose will have huge implications for identifying relevant historical data.

But base rates are still good background information. Claims to uniqueness should take the form of a bayesian update, not a total disregard for priors.

Many of these base rates scream for further qualification. The 32 countries listed as engaged in civil war are generally much less wealthy and democratic than the US. But since the US is literally the world’s wealthiest country, it’s not clear where we should draw the line.

The 4.1% aggregate measure is heavily skewed by the 16% rate of Civil Wars in any country. An obvious objection to this point is that the US is not like those other countries. We’re richer, more democratic, or in some broader sense, more stable.

We can’t look at 2020 data since it will account for the existence of ongoing civil wars. Instead, we’ll take the oldest historical data from 2006, and join it with the list of countries with civil wars that started after 2006:

We should still take into account the dangers listed in Appendix A, but since FSI is actually a sensible leading indicator, it feels reasonable to suggest that coutries with low FSI actually are very unlikely to start a civil war, and the base rate for the population of countries relevant to the US is actually 0%.

It’s tempting to claim a different reference class by drawing up a broad theory, such as: “No western democratic country has had a civil war since WWI”. Except that isn’t actually true. Manuel Azaña was elected Prime Minister of Spain in 1931, leading up to the 1932 Coup, 1934 Revolution and 1936 Civil War.

If you go on Wikipedia and read about societal collapse, you’ll find a near-perfect description of America today:

And if you read Joseph Tainter’s foundational work The Collapse of Complex Societies, you’ll find more of the same, with chapter headings ranging from resource depletion, to catastrophes and social dysfunction.

But note that Tainter is not trying to predict future collapse, merely explain past ones:
Societies do encounter resource shortages, class interests do conflict, catastrophes do happen, and not uncommonly the response does not resolve such problems. A general explanation of collapse should be able to take what is best in these themes and incorporate it. It should provide a framework under which these explanatory themes can be subsumed.

As a result, he doesn’t look at any civilizations which did not collapse in order to determine whether or not these factors are causal. Reading Tainter does not tell us anything about the relative proportion of civilizations who experienced resources shortages, class conflict, etc, and did not fall apart.

I intended all this as a remedy to otherwise alarmist rhetoric, but don’t take a low base rate of succession to mean that we shouldn’t worry about it. A game of Russian Roulette with a 50-chamber cylinder would still be terrifying.

At first approximation, you might think a ~2% chance of collapse gives you an expected value of 98% of your current life, however you may choose to measure it.

But the real harm isn’t in losing your existing health, property, net worth or other assets, it’s the damage to your long term wellbeing. In the Russian Roulette example, you should obviously be willing to pay much more than 2% of your current assets to avoid playing. Instead, it should be something closer to 2% of your expected assets over the rest of your life, subject to an appropriate temporal discount.

This is further aggravated by diminishing returns from assets to wellbeing. A 2% chance of death is much worse than a 2% tax levied on all future income.

I’m not saying you should rush out today and buy guns, or even canned beans. Just that as silly as it feels to prepare for unlikely events, it is sometimes better to pay for insurance than to pick up pennies in front of a steamroller.

If the base rates are already hand wavy, taking the simple average is a frenetic shake. We can easily create semi-redundant rates to increase the weight given to some statistics. US Presidential Elections and 4 Year Span of US History turn up slightly different results, but essentially encode the same information.

You could do sensitivity analysis as before, or report two different averages, with and without the outlier. I’m not sure what the proper adjustment is other than to again, not take any of this at face value.

In the service of that aim, it’s worth noting that models are always garbage in, garbage out. Using overly sophisticated analytical tools can create the illusion of precision where it doesn’t exist. So yes, it might be worth doing the sensitivity analysis in this case, but it risks lending too much credibility while adding too little information.

I’ve conflated these forms of conflict throughout the post. Partially because it’s messy (the Civil War started out as mere secession), but also because I think this is what readers actually care about.

If I told you the odds of Civil War were x%, and then we got a revolution or military coup instead, you would probably feel cheated.

Metaculus is similar to a prediction market and weighs user predictions by their historical correctness. It has a Brier score of 0.095 and a Log score of 0.120, indications that it has been broadly reliable. Of course, this is partially a function of question popularity, with the most popular questions receiving thousands of predictions.