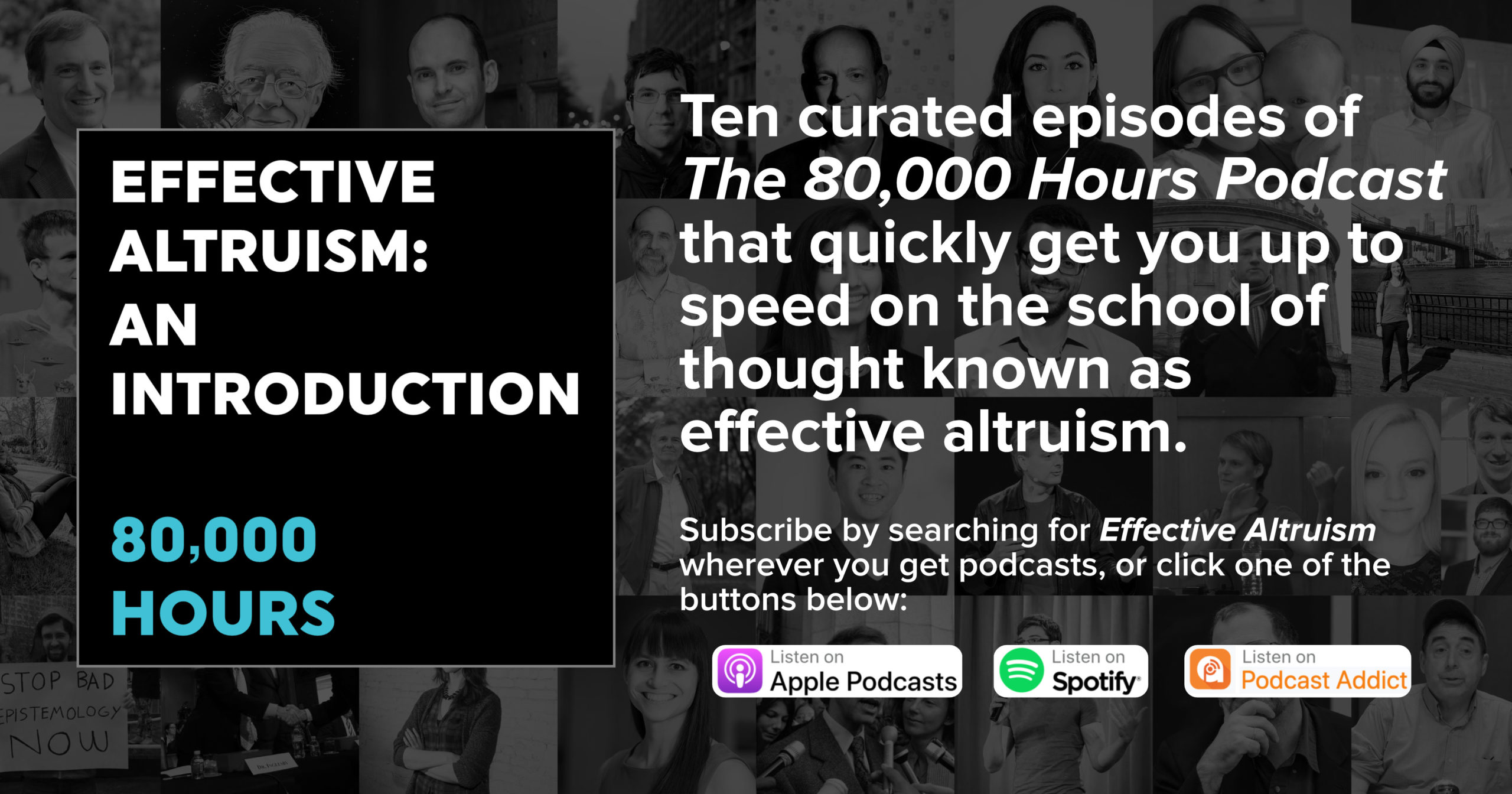 Today we’re launching a new podcast feed that might be useful to you or someone you know.

It’s called Effective Altruism: An Introduction, and it’s a carefully chosen selection of ten episodes of The 80,000 Hours Podcast, with various new intros and outros to guide folks through them.

We think that it fills a gap in the introductory resources about effective altruism that are already out there. It’s a particularly good fit for people:

The reason we put this together now, is that as the number of episodes of The 80,000 Hours Podcast show has grown, it has become less and less practical to suggest that new subscribers just ‘go back and listen through most of our archives.’

We hope EA: An Introduction will guide new subscribers to the best things to listen to first in order to quickly make sense of effective altruist thinking.

Across the ten episodes, we discuss:

At the end of each episode we suggest the interviews people should go to next if they want to learn more about each area.

If someone you know wants to get an understanding of what 80,000 Hours or effective altruism are all about, and audio content fits into their life better than long essays, hopefully this will prove a great resource to point them to.

It might also be a great fit for local groups who we’ve learned are already using episodes of the show for discussion groups.

Like 80,000 Hours itself, the selection leans towards a focus on longtermism, though other perspectives are covered as well.

The most common objection to our selection is that we didn’t include dedicated episodes on animal welfare or global development. (ADDED: See more discussion of how we plan to deal with this issue here.)

We did seriously consider including episodes with Lewis Bollard and Rachel Glennister, but i) we decided to focus on our overall worldview and way of thinking rather than specific cause areas (we also didn’t include a dedicated episode on biosecurity, one of our ‘top problems’), and ii) both are covered in the first episode with Holden Karnofsky, and we prominently refer people to the Bollard and Glennerster interviews in our ‘episode 0’, as well as the outro to Holden’s episode.

If things go well with this one, we may put together multiple curated feeds, likely differentiated by difficulty level, or cause area.

Folks can find it by searching for ‘effective altruism’ in their podcasting app.

We’re very open to feedback – comment here, or you can email us at podcast@80000hours.org.