Why EAs researching mainstream topics can be useful

This post does not necessarily represent the views of my employers.

We could call a topic more “mainstream” the less neglected it is; the more it overlaps with topics and fields that are established and of interest to many people outside the EA community or associated communities[1]; and the more you’d expect that people outside those communities would care about the topic. For example, reducing armed conflict and improving politics are more mainstream topics than are the simulation argument or large-scale risks from AI. (For elaboration on these points, see the Appendix.)

It’s reasonable to ask: Why and how can it be useful for people in the EA community to research relatively mainstream topics? This seems especially worth asking in cases where those people lack relevant expertise and their research projects would be relatively brief.[2] But it may also be worth asking in cases where the person has relevant expertise, would work on the project for longer, or is considering whether to become an expert on a relatively mainstream topic.

I think there are four main, broad, potential paths to impact from such work:[3]

Here are rough, diagrammatic representations of these paths: 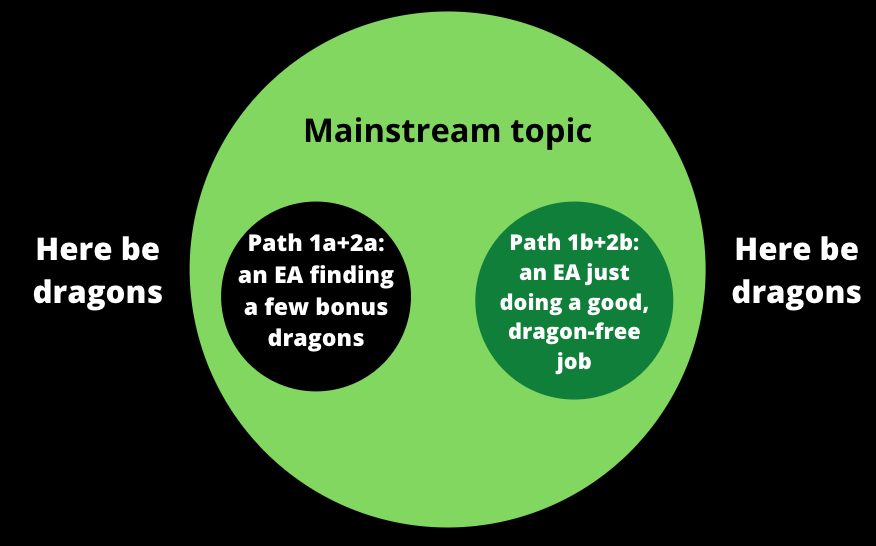 Ultimately, I think that:

This post simply attempts to crystallise and share my thoughts on the question “Why and how can it be useful for people in the EA community to research relatively mainstream topics?”[5] I hope the post will help you:

(See also Do research organisations make theory of change diagrams? Should they?)

To be clear, I do not necessarily intend to advocate for an increase in the overall fraction of EA research that’s focused on relatively mainstream topics. I think it’s clearly the case that some EA researchers should tackle relatively mainstream topics, that others should not, that some should do both, and that this depends mostly on the specifics of a given situation. This post provides many points and counterpoints, notes that some things are “often” the case without saying how often, etc.; in order to make specific decisions, you’d need to combine these general considerations with your knowledge of the specific situation you face.

1. Improve behaviours and decisions within the EA community

For example, there are large bodies of work on war, policymaking, and authoritarianism, but very little work explicitly focused on how those things are relevant to the long-term future, or what implications that has for our actions. How much would “war” increase or decrease existential risk or the chance of other trajectory changes? By what pathways? How does this differ based on the type of war and other factors? These questions are crucial when deciding (a) how much to prioritise work on “war” and (b) what specific work on war to prioritise (or to actively avoid due to downside risks).

There are also various other types of high-priority, non-mainstream questions that can often be found within mainstream topics. For example, questions about the importance, tractability, and neglectedness of a problem area; the cost-effectiveness of various possible actions; or probabilistic forecasts of what the future will bring or what impacts an action would have.

Of course, a lot of existing work is relevant to such questions, even if it’s not motivated by them. And in some cases, people will already have sufficient clarity on those questions for the decisions they need to make. This clarity could come from things like making relatively obvious inferences from the work that does exist, or having conversations with people who’ve thought about these issues but who haven’t written their thinking up.

But even if there are high-priority non-mainstream questions within mainstream topics, why should we expect an EA without relevant expertise to be able to generate useful answers within a relatively brief time? Firstly, the neglectedness of the specific question may mean it’s relatively easy to improve our answers to it.

Secondly, the EA need not start from scratch; they may be able to simply synthesise and draw implications from the mainstream work that’s relevant to—but not focused on—the question of interest. For example, the EA could have conversations with experts on the mainstream topic and directly ask them the non-mainstream questions, then publish notes from the conversation or a write-up that uses it as an input.

Examples of work with this path to impact include 80,000 Hours’ problem profiles and career reviews, many cause area reports by Open Philanthropy and Founders Pledge, and many conversation notes published by GiveWell or Open Philanthropy.

1b. Provide better answers than the existing work has

In many (but not all) cases, EAs could provide better answers than the existing work has on the same questions that the existing work aims to answer. And this can happen even for mainstream topics, for EAs with relatively little relevant expertise, and for relatively brief research projects, although each of those features makes this achievement less likely.

I expect some readers will feel those statements are so obviously true as to not be worth saying, while others will feel the statements smack of arrogance, insularity, and epistemic immodesty. Interested readers can see further discussion in a comment.

Here’s a procedure that could in theory be followed, but that’s in practice far too difficult and time-consuming:

There are many possible ways to deal with the fact that the above procedure is too difficult and time-consuming to follow in practice. One way starts with some EAs going through the above procedure for some subset of the types of actions or decisions EAs need to make, or for some subset of the bodies of knowledge that are out there. (For example, they could learn what’s already known about great power war, or what longtermism-relevant things are already known in political science.) These EAs can then do things like:[9]

Why would this be better than the ultimately-influenced-people simply going through the above procedure themselves, finding write-ups by non-EA, or being contacted by or contacting non-EAs? In many cases, it won’t be. But here are some (inter-related) reasons why it often can be useful:

For simplicity, this section focused on knowledge, but essentially the same points could be made about theories, methodologies, techniques, heuristics, skills, ways of working, etc.; other communities have developed many examples of each of those things that could be usefully brought into the EA community.

2. Improve behaviours and decisions in other communities

The vast majority of what happens in the world is of course determined by decisions made outside of the EA community—by governments, think tanks, academics, voters, people deciding on careers, etc. And the more mainstream a topic is, the more actors outside of the EA community will tend to care about research on it. This would presumably tend to increase the expected amount of non-EA resources or other decisions (e.g., legislative or regulatory decisions) that research on such topics will influence, at least if we control for factors like how high-quality and strategic the research and dissemination was.

This influence could come from research on non-mainstream questions within mainstream topics (see section 1a) or from research that provides better answers that existing work has (see section 1b), as long as insights from that research are transmitted to decision-makers in other communities and influence their decisions. Or this influence could come from bringing existing knowledge, theories, methodologies, techniques, heuristics, skills, ways of working, etc. from the EA community into other communities, in a process mirroring that described in section 1c.

We could also perhaps think of this path to impact as including elements of field building and movement building, such as increasing non-EAs’ awareness of and inclination towards EA, or topics that seem important from an EA perspective, or ideas from the EA community, etc.

All that said, influencing a larger amount of non-EA resources or other decisions (e.g., legislative or regulatory decisions) must be traded off against:

3. Build networks between EA and other communities

Researching relatively mainstream topics can help build knowledge of and connections in other communities which work on related issues. (And this is an advantage over researching less mainstream topics, precisely because those topics will touch on fewer or smaller communities.) The more EAs have such knowledge and connections, the better they—or the people they talk to—can recommend non-EA organisations, projects, job-seekers, experts, etc. for EAs to fund, work for, hire, get advice from, get mentorship from, etc. In addition to recommendations, they could also make introductions, make referrals, provide signal-boosts or put in a good word, and so on.[12]

This can overlap or aid with the paths to impact discussed above. For example, this can be seen as “researching” the very narrow, applied, non-mainstream question “Which organisations and experts should EAs funders consider funding or getting advice from?”, and as helping “busy deciders” find non-EAs they can trust the input of and/​or delegate to.

And the information, referrals, etc. can also flow in the other direction. For example:

4. Equip the researchers for influential roles in other communities

As noted, the vast majority of what happens in the world is determined by decisions made outside of the EA community. And these decisions are often made poorly or in ways poorly aligned with EA values. Thus, EAs could often be impactful by filling and effectively using influential roles in other communities. (See also working at EA vs non-EA orgs and Dafoe’s (2020) “field building model of research”.)

EAs will be better able to do this if they acquire relevant knowledge, skills, connections, and credibility. Doing research on mainstream topics is often one effective way to acquire those things, and is sometimes the most effective way.[13]

Appendix: Notes on what I mean by “mainstream”?