The Importance of GWWC Cohort Data

Cross-posted on my blog

There are a few pieces of information that are required to properly analyze the value of Giving What We Can‘s membership.

They’re necessary for GWWC’s managers to evaluate different strategies. If GWWC was an object-level charity, we wouldn’t donate to it without knowing these numbers. And if GWWC were a public company, investors would not provide funding without such disclosure. As such, hopefully these metrics are already being collected internally, and publicly sharing them should not be very difficult, though very valuable. If not, GWWC should start collecting them!

GWWC already publishes the number of members it has at any given point and the total amount pledged. From this it’s easy to derive how many joined in any given year. However, it’s hard to judge what these people did later – how many fulfilled the pledge, and how much did they donate? Worse, this makes it hard to forecast the value of a new member, so we can’t tell how much effort we should put into extensive growth. As far as I can see (sorry if I just couldn’t find the data), we do not currently release the data required to make this analysis.

As part of it’s annual report, GWWC should release data on each cohort: how many of that cohort fulfilled the pledge by donating 10%; how many were ‘excused’ from donating 10% ( e.g. by being students); how many failed to abide by the pledge, donating less than 10% despite having an income; and how many did not respond.

While in the 2013 annual report, GWWC would have reported

This would allow us to see how each cohort matures of time, helping us answer some very important questions:

There are some other numbers that might be nice to know, for example breaking the data down by age, sex, nationality, or even CEA employee vs non-employee, but it’s important not to impose too high a reporting burden.

Why this is not idle speculation

This might seem a bit ambitious. Yes, it would be nice if GWWC released this data. But is it really a pressing issue?

I think it is.

Sometimes banks will make a series of bad loans – loans which are repaid at a significantly lower than expected rate, perhaps because the bank was trying to grow aggressively. When the first signs of this emerge, like people being late on payments, banks have two alternatives. The honest one is to admit there is a problem and ‘write down’ the loan – take a loss to profits. The perhaps less honest one is to extend and pretend – give the borrowers more time to repay and pretend to yourself/​auditors/​investors that they will come good in the end. This doesn’t actually create any value; it just delays the day of reckoning. Worse, it propagates bad information in the meantime, causing people to make bad decisions.

Unfortunately they neglected the Litany of Gendlin:

About a year ago, people were concerned that GWWC’s growth was slowing – only growing linearly, rather than exponentially. This would be pretty bad, and people were justifiably concerned. However, GWWC made a few changes with the aim of promoting growth. Most pertinently: 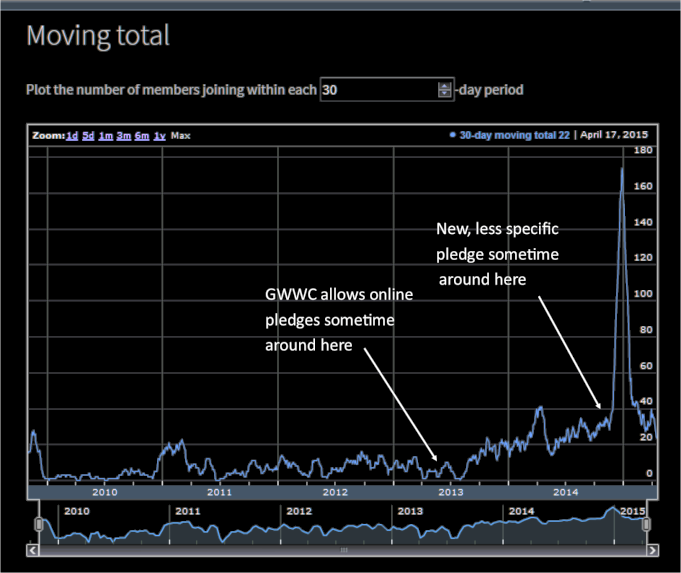 The concern is that, though these measures have increased the number of members, they may have done so by reducing the average quality of members. Making it easier to join means more marginal people, with less attachment to the idea, can join. This is still good if their membership adds value, but they dilute the membership, which means we shouldn’t account for the average new member being signed up now as being equally valuable as the members who joined up in 2010. Additionally, the reduction in pomp and circumstance might reduce the gravitas of the pledge, making people take it less seriously and increase drop-out rates. If so, moving to paperless pledges might have reduced the value of sub-marginal members as well as diluting them. This makes it harder to forecast the value of members, and might lead to over-investment in acquiring new ones.

This seems potentially a big risk, and it’s the sort of issue that this data would allow us to address. Of course, there are many other applications of the data as well.

And GWWC in fact has even stronger reasons than banks to report this data. The bank might be wary of giving information to its competitors, but GWWC has no such concerns. Indeed, if releasing more data makes it easier for someone else to launch a competing, better version of GWWC, all the better!

If you liked this you might also like: Happy 5th Birthday, Giving What We Can and GiveWell is not an Index Fund