Toby Ordãs The Precipice is an ambitious and excellent book. Among many other things, Ord attempts to survey the entire landscape of existential risks[1] humanity faces. As part of this, he provides, in Table 6.1, his personal estimates of the chance that various things could lead to existential catastrophe in the next 100 years. He discusses the limitations and potential downsides of this (see also), and provides a bounty of caveats, including:

Donãt take these numbers to be completely objective. [...] And donãt take the estimates to be precise. Their purpose is to show the right order of magnitude, rather than a more precise probability.

Another issue he doesnãt mention explicitly is that people could anchor too strongly on his estimates.

But on balance, I think itãs great that he provides this table, as it could help people to:

Regarding points 2 and 4: In reality, merely knowing that these are Ordãs views about the levels of uncertainty and risk leads me to update my views quite significantly towards his, as heãs clearly very intelligent and has thought about this for much longer than I have. But I think itãs valuable for people to also share their ãindependent impressionsããwhat theyãd believe without updating on other peopleãs views. And this may be especially valuable in relation to Ordãs risk estimates, given that, as far as I know, we have no other single source of estimates anywhere near this comprehensive.[2]

Iãll hardly discuss any of the evidence or rationale Ord gives for his estimates; for all that and much more, definitely read the book! 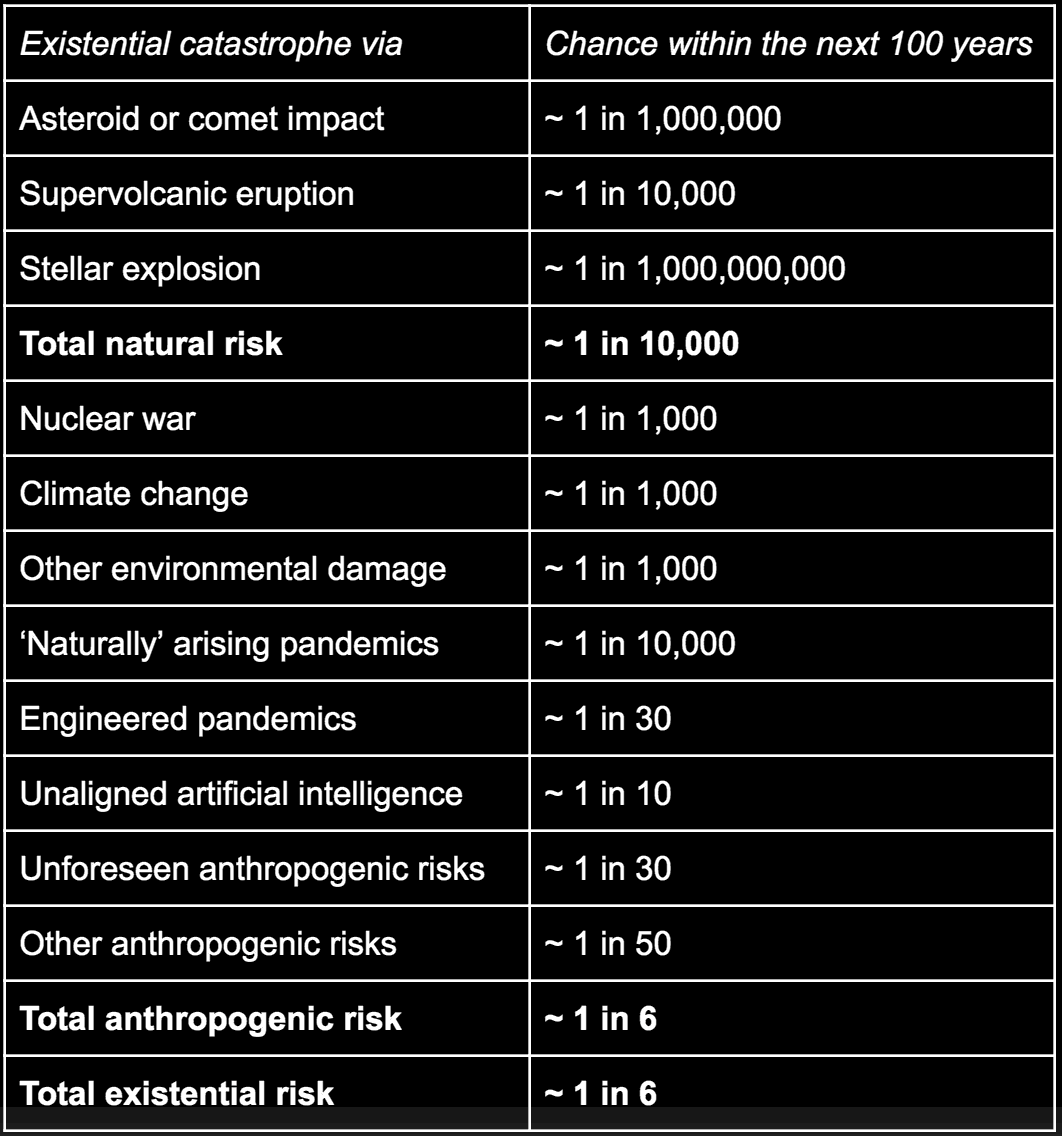 In the caption for the table, Ord writes:

There is significant uncertainty remaining in these estimates and they should be treated as representing the right order of magnitudeãeach could easily be a factor of 3 higher or lower.

More seriously: This at least feels to me surprisingly ãcertainã/ããpreciseã, as does his above-quoted statement that the estimatesã ãpurpose is to show the right order of magnitudeã. On the other hand, Iãm used to reasoning as someone who hasnãt been thinking about this for a decade and hasnãt written a book about itãperhaps if I had done those things, then itãd make sense for me to occasionally at least know how many 0s should be on the ends of my numbers. But my current feeling is that, when it comes to existential risk estimates, uncertainties even about orders of magnitude may remain appropriate even after all that research and thought.

Of course, the picture will differ for different risks. In particular:

Iãd be interested in other peopleãs thoughts on whether Ord indeed seems to be implying more precision than is warranted here.

What types of catastrophe are included in the ãUnaligned AIã estimate?

Ord estimates a ~1 in 10 chance that ãunaligned artificial intelligenceã will cause existential catastrophe in the next 100 years. But I donãt believe he explicitly states precisely what he means by ãUnaligned AIã or ãalignmentã. And he doesnãt include any other AI-related estimates there. So Iãm not sure which combination of the following issues heãs estimating the risk from:[4]

In Ordãs section on ãUnaligned artificial intelligenceã, he focuses mostly on the sort of scenario Bostromãs Superintelligence focused on (issue #1 in the above list). However, within that discussion, he also writes that we canãt be sure the ãbuilders of the system are striving to align it with human valuesã, as they may instead be trying ãto achieve other goals, such as winning wars or maximising profits.ã And later in the chapter, he writes:

Iãve focused on the scenario of an AI system seizing control of the future, because I find it the most plausible existential risk from AI. But there are other threats too, with disagreement among experts about which one poses the greatest existential risk. For example, there is a risk of a slow slide into an AI-controlled future, where an ever-increasing share of power is handed over to AI systems and an increasing amount of our future is optimised towards inhuman values. And there are the risks arising from deliberate misuse of extremely powerful AI systems.

Iãm not sure whether those quotes suggest Ord is including some or all of issues #2-5 in his definition or estimate of risks from ãunaligned AIã, or if heãs just mentioning ãother threatsã as also worth noting but not part of what he means by ãunaligned AIã.

Iãm thus not sure whether Ord thinks the existential risk:

(B) from some subset of those issues is ~1 in 10, while the risk from the other issues is negligible.

Personally, and tentatively, it seems to me that at least the first four of the above issues may contribute substantially to existential risk, with no single one of the issues seeming more important than the other three combined. (Iãm less sure about the importance of structural risks from AI.) Thus, if Ord meant B or especially C, I may have reason to be even more concerned than the ~1 in 10 estimate suggests.

Iãd be interested to hear other peopleãs thoughts either on what Ord meant by that estimate, or on their own views about the relative importance of each of those issues.

Ord estimates a ~1 in 1000 chance that ãother environmental damageã will cause existential catastrophe in the next 100 years. This includes things like overpopulation, running out of critical resources, or biodiversity loss, and not climate change.

I was surprised that that estimate was:

I also intuitively feel like the risks from ãnaturallyã arising pandemics is larger than that from other environmental damage, or at least not 10 times lower. (And I donãt think thatãs just due to COVID-19; I think I wouldãve said the same thing months ago.)

One the other hand, Ord gives a strong argument that the per-century extinction risks from ãnaturalã causes must be very low, based in part on our long history of surviving such risks. So I mostly dismiss my intuitive feeling here as quite unfounded; I suspect my intuitions canãt really distinguish ãNatural pandemics are a big deal!ã from ãNatural pandemics could lead to extinction, unrecoverable collapse, or unrecoverable dystopia!ã

On the third hand, Ord notes that that argument doesnãt apply neatly to ãnaturallyã arising pandemics. This is because changes in society and technology have substantially changed the ability for pandemics to arise and spread (e.g., thereãs now frequent air travel, although also far better medical science). In fact, Ord doesnãt even classify ãnaturallyã arising pandemics as a natural risk, and he places them in the ãFuture risksã chapter. Additionally, as Ord also notes, that argument applies most neatly to risks of extinction, not to risks of ãunrecoverable collapseã or ãunrecoverable dystopiaã.

So I do endorse some small portion of my feeling that the risk from ãnaturallyã arising pandemics is probably more than a 10th as big as the risk from other environmental damage.

Ord estimates the chances that ãother anthropogenic risksã or ãunforeseen anthropogenic risksã will cause existential catastrophe in the next 100 years are ~1 in 50 and ~1 in 30, respectively. Thus, he views these categories of risks as, respectively, ~20 and ~33 times as existentially risky (over this period) as are each of nuclear war and climate change. He also views them as in the same ballpark as engineered pandemics. And as there are only 5 risks in the ãotherã category, this means he must see at least some of them (perhaps dystopian scenarios and nanotechnology?) as posing much higher existential risks than do nuclear war or climate change.

I was surprised by how high his estimates for risks from the ãotherã and ãunforeseenã anthropogenic risks were, relative to his other estimates. But I hadnãt previously thought about these issues very much, so I wasnãt necessarily surprised by the estimates themselves, and I donãt feel myself inclined towards higher or lower estimates. I think my strongest opinion about these sources of risk is that dystopian scenarios probably deserve more attention than the longtermist community typically seems to give them, and on that point it appears Ord may agree.

Should this update our career and donation decisions?

One (obviously imperfect) metric of the current priorities of longtermists is the problems 80,000 Hours recommends people work on. Their seven recommended problems are:

The last three of those recommendations seem to me like theyãd be among the best ways of addressing ãotherã and ãunforeseenã anthropogenic risks. This is partly because those three activities seem like theyãd broadly improve our ability to identify, handle, and/ãor ãrule outã a wide range of potential risks. (Another top contender for achieving such goals would seem to be ãexistential risk strategyã, which overlaps substantially with global priorities research and with building EA, but is more directly focused on this particular cause area.)

But as noted above, if Ordãs estimates are in the right ballpark, then:

So, if Ordãs estimates are in the right ballpark, then:

Of course, Ordãs estimates relate mainly to scale/ãimpact, and not to tractability, neglectedness, or number of job or donation opportunities currently available. So even if we decided to fully believe his estimates, their implications for career and donation decisions may not be immediately obvious. But it seems like the above questions would be worth considering, at least.

From memory, I donãt think Ord explicitly addresses these sorts of questions, perhaps because he was writing partly for a broad audience who would neither know nor care about the current priorities of EAs. Somewhat relevantly, though, his ãrecommendations for policy and researchã (Appendix F) include items specifically related to nuclear war, climate change, environmental damage, and ãbroadã approaches (e.g., horizon-scanning for risks), but none specifically related to any of the ãother anthropogenic risksã.

As stated above, I thought this book was excellent, and Iãd highly recommend it. Iãd also be excited to see more people commenting on Ordãs estimates (either here or in separate posts), and/ãor providing their own estimates. I do see potential downsides in making or publicising such estimates. But overall, it seems to me probably not ideal how many strategic decisions longtermists have made so far without having first collected and critiqued a wide array of such estimates.

This is one of a series of posts I plan to write that summarise, comment on, or take inspiration from parts of The Precipice. You can find a list of all such posts here.

This post is related to my work with Convergence Analysis, but the views I expressed in it are my own. Iãm grateful to David Kristoffersson for helpful comments on an earlier draft.